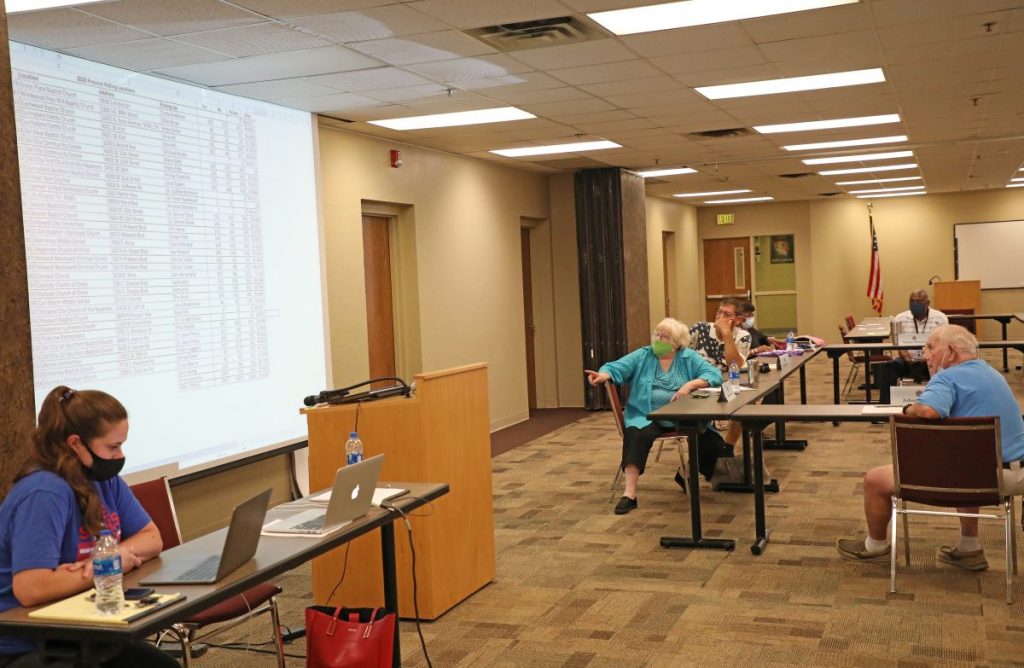 The Mid-Del School Board watches as results are displayed in the June 30 school bond election. (Photo by Jeff Harrison)

Superintendent Rick Cobb and the Mid-Del School Board anxiously watched as election results rolled in Tuesday evening during a special meeting.

The district’s $8.84 million bond proposal was just one of many items on the ballot in a crowded June 30 statewide primary.

Staff updated the precinct results on a large spreadsheet as they were called in by others at the polls. And when the final results came in from Del View Baptist Church just after 8 p.m., the group cheered as the bond issue passed with 62.92%. 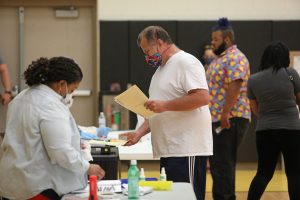 “I’m thankful that the community continues to support us. This school district has a great track record of supporting bond elections and helping us make capital improvements and helping our academic and extracurricular programs. This bond issue just keeps us moving forward,” Cobb said last Tuesday night.

Last week’s election was an especially challenging one for district leaders. The bond election was originally scheduled for April 7 but was delayed due to the virus. District leaders prefer to have bond elections during the school year when they can provide information to parents and patrons. This year they launched a social media campaign to notify patrons.

“We thought people were supportive of the district and they were, but it was just so different than every other situation we’ve been in for a bond issue,” Cobb said. “It’s just one more way that things are different now and we’re dealing with it.”

Sonya Gurau, who has nine grandchildren in the school district, said she had no apprehension about voting in person at Midwest City Elementary or supporting the bond proposal.

“I think the schools need improvements all around,” she said. “The teachers and kids all need more.”

Ryan Jamison, 19, graduated from Midwest City High School last year and said he knows firsthand the needs of the district.

“I went there, and I know we need the repairs,” Jamison said Tuesday night after voting at Midwest City Elementary School. “I used to sit in desks that were falling apart. And remember bathrooms that didn’t work.”

The bond issue will provide funding for playground equipment, improved accessibility, band and orchestra uniforms, fine art equipment, security cameras, new roofing at the Mid-Del Technology Center and classroom and restroom remodels. Each school site will have a project.

It will replace a previous bond set to expire and will not increase property taxes, Cobb said. The expiring 2014 bond issue provided security upgrades across the district. Cobb described the 2020 bond issue as a supplement to a 2017 bond that included several large construction projects, technology, and transportation upgrades.

Cobb said the district could start receiving bond funds in late September. He said they plan to meet with playground designers and band and orchestra directors in late July or early August to plan the projects. Once the plans and funding are in place, Cobb said they will begin working on the projects.

“Once we have it planned out, installation of the playgrounds should happen pretty quickly and the same things with the band and orchestra,” Cobb said.

The bond issue received at least 60% in 20 of the 34 precincts.  Voters in precinct 80 (LifeChurch in Midwest City) had the highest total of yes votes with 504. The measure received more than 70% support from voters at Forest Park City Hall, Spencer United Methodist, Midwest Boulevard Christian Church (Precinct 87), and First Southern Baptist Church (Precinct 250).
Voters at Barnes Elementary cast the most no votes with 317, and Crestview Baptist Church had the lowest percentage at 47.14%.