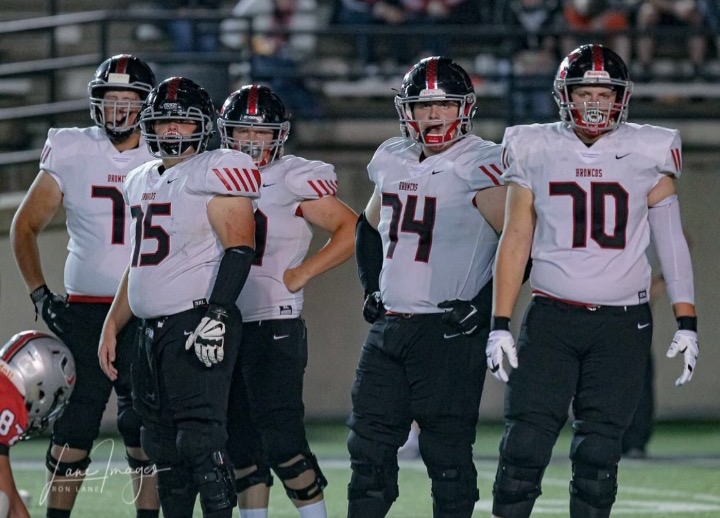 In this week’s edition of highlighting graduated seniors whose season was cut short by COVID-19, we’ll talk to Broncos’ two-sport star Connor Leeper. As a defensive lineman on the football team, Leeper was chosen for all-state honors. In track and field, Leeper is a shot-putter who made it to state last year and was considered to be one of the favorites for the state meet that was canceled.

The fact that the season was cut short was disappointing to Leeper, but it doesn’t bother him all that much, because he has a plan. Leeper, who plans to be a missionary, leaves for Chile later this month for a two-year mission trip. After the two years are complete, Leeper intends to walk on for the Brigham Young University Cougars football team. In addition, Leeper is hopeful he will be able to continue his shot-put career at Brigham Young.

SM: Tell me a little bit about your family.
CL: My dad’s name is Elvis, my mom’s name is Becky. Mom grew up in Mustang, and was part one of Coach McGarry’s state championships. My little brother is Shamus, and he’s a sophomore. Now I get to tease him about how sore he is after workouts instead of him teasing me.
SM: Who is the person you most look up to?
CL: I’d have to say my dad, because he grew up with nothing, and knowing how hard he works to make sure that we have things, and that I have all of these opportunities; it just really means a lot to me.
SM: What’s your favorite sports movie?
CL: Remember the Titans.
SM: What’s your pet peeve?
CL: I hate lying.
SM: What’s your favorite food?
CL: Pretty much anything, but Fettucine Alfredo is my favorite.
SM: What’s your least favorite food?
CL: Pickles!
SM: Is there anything you’d like to say to the folks of Mustang before you head to Chile?
CL: I’m just thankful for all of the people that have supported me.
SM: Thank you and best of luck in your mission work, Connor Leeper!