Canadian County district attorney Mike Fields found two Mustang police officers were justified in their use of deadly force and were doing their duty when they fatally shot a suspect during a June 5 incident.

That finding came after an investigation by Oklahoma State Bureau of Investigation, which was tasked as a matter of regular procedure with determining what happened the day 42-year-old Benjamin Harold Ballard of Yukon died. The district attorney’s findings were conveyed to Mustang Police Chief Rob Groseclose in a June 26 letter. That letter also revealed several details about the shooting – and what led up to it – not previously known outside the investigation and those involved.

The incident
The June 5 incident began when an off-duty Mustang police detective spotted a truck later determined to be driven by Ballard traveling erratically on SW 59th Street. 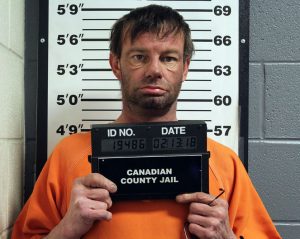 “The detective was concerned that the vehicle was potentially being operated by an intoxicated driver,” Fields stated. “As a result, the detective called Mustang police dispatch and followed the truck to the Fast Track convenience store,” located in the 1500 block of North Mustang Road.

Ballard then parked the truck in the convenience store parking lot; the detective again observed the Yukon man acting in a way he thought to be under the influence of some kind of substance. On-duty Mustang officers then arrived on scene, several of whom also observed Ballard moving erratically, the district attorney said. One of those officers was identified as a certified drug recognition expert, who confirmed the belief Ballard was under the influence of either drugs or alcohol; a total five officers were directly involved in attempting to subdue Ballard and deescalate the situation, Fields said.

The situation began to escalate when officers asked Ballard to get out of the truck so they could investigate his condition – which the Yukon man refused to do.

“Two Mustang officers warned Ballard that if he did not voluntarily exit his vehicle they would have no choice but to forcibly remove him from the vehicle; Ballard still refused,” Fields wrote.
Instead, the district attorney stated, Ballard reached behind himself as officers ordered him to stop, while attempting to grab his right arm and hand. Unable to remove him from the truck, officers then saw Ballard had a handgun in his right hand.

In addition to verbally asking Ballard several times to let go of the gun, two officers also attempted to tase him in an attempt to defuse the situation, but were unsuccessful, the investigation showed.

Two witnesses not associated with the police department also recounted their observations of the incident, saying officers were, “pleading with Ballard to release the weapon and saying a variation of, ‘I don’t want to kill you.’”

Ballard instead continued to struggle with officers; several of them told investigators they heard him say, “Just kill me,” Fields stated.
It appeared the Taser attempt caused one officer involved with trying to disarm Ballard to move away after he was briefly shocked by one of the probes, Fields stated.

“As a result that officer briefly was disengaged from Ballard,” the district attorney wrote. “At that time, Ballard began to move his gun toward the officers.”
That was when two Mustang officers fired at and struck Ballard, which caused him to fall out of the truck – in doing so, he dropped a 0.22-caliber revolver by the truck’s driver’s side door. OSBI investigators later discovered the revolver was loaded with six rounds.
Ballard died at the scene.

Investigators also discovered in the truck an open, partially empty bottle of beer, cooler with 14 unopened beer bottles and several empty prescription bottles, Fields stated.
“The officers’ initial contact with Ballard was justified based upon their observations; then, they made every attempt to diffuse the situation – first by using no force at all and then by using nondeadly force,” Fields concluded. “The decedent’s actions of grabbing a gun, refusing to let go of it and ultimately moving it toward the officers posed an imminent danger of death or great bodily injury.

“The officers acted in a manner consistent with their duties and obligations,” he said.

Ballard’s record
Kingfisher County District Court prosecutors charged Ballard in March with two misdemeanor charges – carrying a firearm while under the influence of alcohol and public intoxication. According to documents filed in that case, Ballard was allegedly carrying a Smith and Wesson M&P Shield 0.38-caliber pistol at a store in Kingfisher when arrested.
That case was delayed due to the coronavirus pandemic, but Ballard appeared at a June 1 hearing, which was reset to Aug. 3. If convicted, Ballard could have faced a maximum $500 fine and up to six months in jail.

In addition to the Kingfisher County case, Ballard’s record contained several other convictions, according to Oklahoma State Courts Network, including a 2014 driving while under the influence of alcohol misdemeanor and failure to keep in proper lane traffic case and two 2018 traffic cases for driving under revoked license and speeding.

He received a one-year suspended sentence, costs and fees in the 2014 and 2018 cases, respectively. Both of those were filed in Canadian County District Court.

‘We swear an oath to serve and protect’
Groseclose held a July 2 news conference scheduled by an Oklahoma City law firm to present some of the details contained in the district attorney’s letter obtained by the Times. At that time, the chief expressed sadness over the incident similar to comments given shortly after the June 5 shooting.

“Certainly, any loss of life is tragic; I certainly feel for all the officers on the scene as well as the family of the suspect,” Groseclose said at that time. “As a police officer we swear an oath to serve and protect, some days that is easier than others; please pray for all those lives that have been changed.”

Note: While the Mustang officers involved in the June 5 shooting have been identified, Mustang Times, as a community newspaper, has determined it will not release those names.