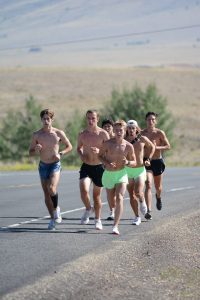 The Mustang Broncos Boys’ Cross Country program has been a force to be reckoned with for many years under the guidance of Coach Mike McGarry. He has overseen five state championship teams, three state runner ups teams, and two Academic State Championship teams in cross country.  His program has produced six individual state champions, who won 10 individual state titles. Since McGarry took over the program in 1991, the teams have had 44 all state athletes.

Two of those individual state titles belong to senior Gabe Simonsen, who will look to win back-to-back-to-back championships for the Broncos this season. Simonsen, in an effort to bring all the seniors together and to get in some serious training, organized a two-week trip to Eagles Nest, New Mexico, where Simonsen’s family has a cabin.

So Simonsen, Brendan Robeaux, Kyle Bussell, Colton Cable, Jose Sardina, and Parker Arnold loaded up and headed to New Mexico. Simonsen’s grandpa came along to chaperone the boys.
The six seniors ran in high altitude for two solid weeks, no doubt reaping the benefits produced by gasping for breath in the thin air.

“I would say that all the guys averaged between 80 and 100 miles for the two-week stay.” said Simonsen.

McGarry had high praise for this group of seniors that stepped out and did this on their own.

“They’re doing everything they can to be the best that they can be in order to have a great season,” said McGarry. “Last year the boys finished fourth, which is one place short of the podium. They have a real shot to make it to the podium this season. Hopefully we’ll have a season. Those boys are showing good senior leadership.”