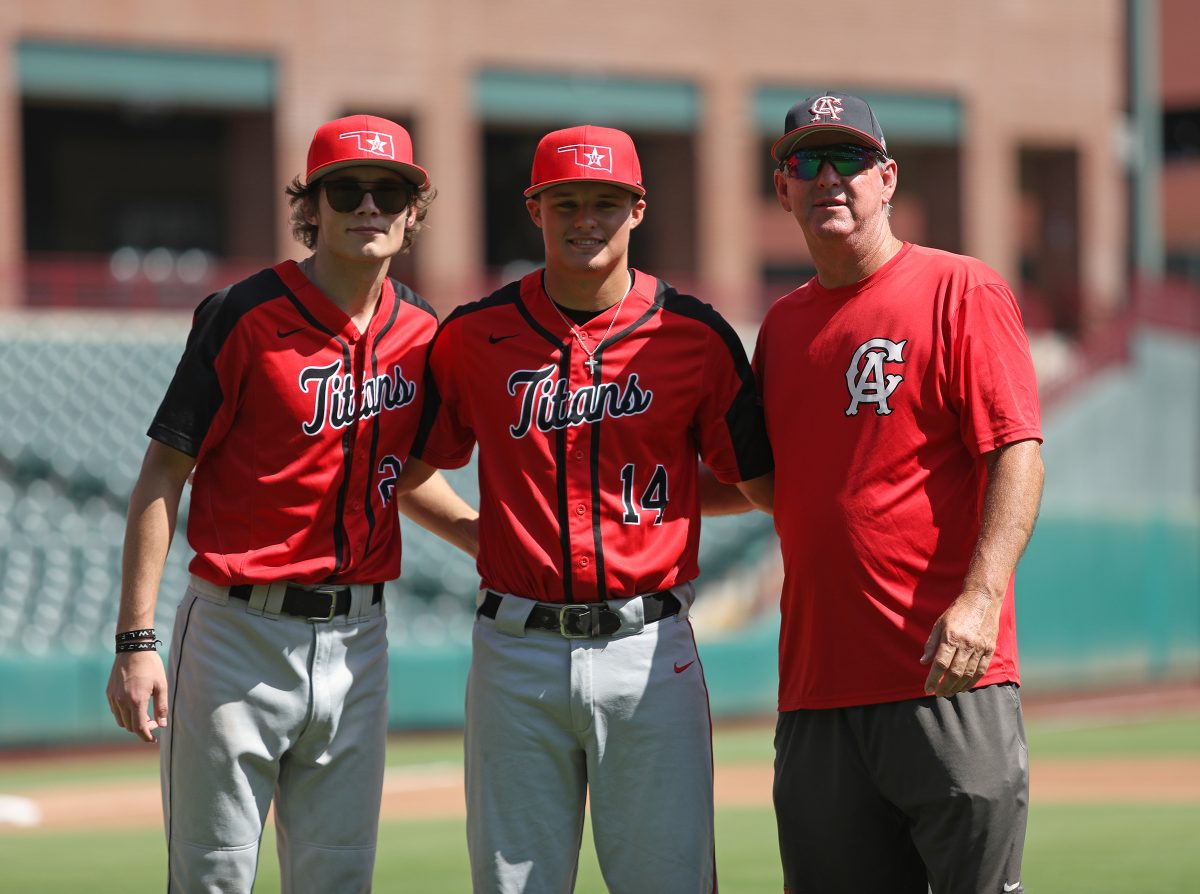 OKLAHOMA CITY – Jake Estes made sure his last at bat in a Carl Albert uniform was a good one.

The recent graduate drove in the go ahead run in the top of the seventh inning to give the Large West squad a 10-9 comeback win in the Oklahoma Baseball Coaches Association All-State Game Saturday afternoon at Chickasaw Bricktown Ballpark.

“That was a pretty great feeling. We just battled back and came out with the win,” Estes said. 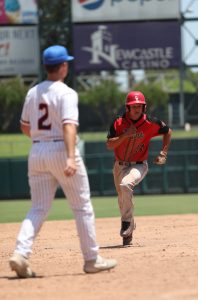 The West trailed 9-4 heading into the seventh. Estes singled and later scored early in the inning to make it a 9-5 score. Putnam City West’s Jakob Brandenberger drove in three runs with a bloop single to right and later scored on a wild pitch tying the game at 9 all.

Estes stepped to the plate for the second time in the inning, this time with a runner at third base. He got behind 1-2 in the count before skipping a slow roller to short. Estes blazed down the first base line to beat the throw for an infield hit and a 10-9 lead.

“I just wanted to put it in play and make something happen, and it went that way,” Estes said.

The West held the East scoreless in the bottom of the inning to close out the win. 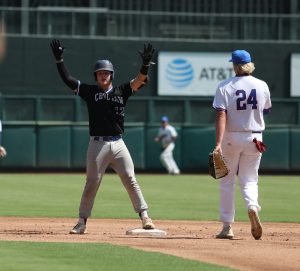 Choctaw’s Cooper Harris celebrates after hitting an RBI double in the first inning of the all-state game. (Photo by Jeff Harrison)

Harris started the game at catcher and drove in the second run of the game. In the first inning, the Wichita State signee hit an RBI double to left field and walked in the third inning.

“Their pitcher got me to a 3-2 count and then threw a changeup and I hit it pretty well,” Harris said.

Brewer was honored but did not play due to injury.

Estes, who signed with Redlands Community College, started at second base and went 3 for 4 at the plate with 2 runs scored and an RBI.

Thomas pitched about two innings for the West. He pounded the strike zone in a scoreless third inning before getting into trouble in the fourth.

“I felt great that first inning, but was a little shaky in the second one,” Thomas said. “I was a little sore from my previous outing on Wednesday with summer ball.”

The University of Oklahoma signee said it was a pleasure representing the Titans one final time.

“Our season got cut short, but that’s okay,” Thomas said. “I still have a lot of school pride and it felt great playing again.”

Enid’s Conner Gore was named the MVP of the Large School All-State Game.

The Small East team won 4-0, and the Middle West were 4-2 winners in the other all-state games on Saturday.