The department has a newly renovated training room, and they also utilize the technology center to complete monthly training courses.

Those monthly training courses help keep Choctaw’s officers up to date on the latest practices, techniques and technology.

“Seeing what’s needed, we can bring in someone in certified to teach and do it right here. We save money doing that, and can also invite other nearby municipalities that need that training,” said Choctaw Police Chief Kelly Marshall. 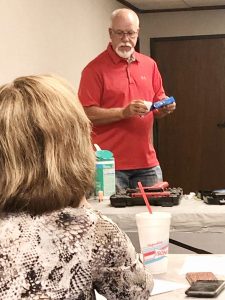 Marshall says de-escalation training is a regular part of that officer training.

Oklahoma Municipal Assurance Group works to be the primary provider of insurance and risk management solutions to help Oklahoma’s cities and towns improve the quality of life of their citizens.

Each officer runs through multiple interactive video simulations where they’re tasked to attempt to de-escalate hostile encounters and make quick decisions to use deadly force or attempt a nonlethal resolution.

Since that equipment moves around through all OMAG member departments that training is only available about once a year, but Choctaw PD would like to increase access to that training to about every six months.

Last week and this week, all of Choctaw’s officers received the training, and neighboring agencies were also invited to utilize the training opportunity.

“You have to treat this situation as real, because when you leave here you might run into the exact same situation,” noted Carter before officers started their simulations.

In addition to adrenaline-pumping simulations, the course also featured an educational video focusing on two unfortunate cases where actions of Oklahoma officers resulted in public casualties.

Carter says officers always need to be scanning the scene in order to make the best decisions possible.

Marshall is working to make sure her officers have the training and resources needed to best serve and protect the community. 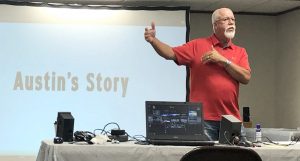 The Choctaw Police Department has 19 officers as of June 30, and the department is currently budgeted to have up to 21.

The department also has four reserve officers, and is looking to expand that program.

“My concentration has been on the full-time, but that’s a program I need to build. Frankly, it’s just expensive to expand. By the time you buy the uniform, vest and thing like that it’s just expensive to outfit them,” explained Marshall. “I probably have 10 applications for reserve officers, but I don’t currently have the budget to get them certified and outfit reserves.”

The department works 10-hour shifts so there’s always one to three officers on duty within the city.

For more about OMAG visit OMAG.com.