City Council to vote on public mask order on Tuesday 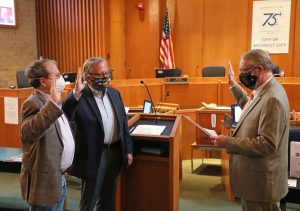 City Manager Tim Lyon and council members Sean Reed and Pat Byrne wear face masks during a meeting in April. The council is considering an ordinance that would require people to wear masks in public. (Staff photo by Jeff Harrison)

Midwest City is the latest community in the metro to consider making face masks mandatory in public.

The city council will consider an emergency ordinance at Tuesday’s meeting.

City Manager Tim Lyon said the proposal is in response to an increase in positive cases and hospitalizations and recommendations from public health and hospital officials and city council members.

“We tried to make a mask ordinance that is reasonable and with as much common sense as possible,” Lyon said. “And we also looked at what Tulsa and Oklahoma City did.”

The proposed ordinance states that, “every person in the City of Midwest City shall wear a face covering over the nose and mouth worn consistent with CDC guidelines when inside a commercial entity or other building, structure or space open to the public, wherever it is not feasible to maintain six feet of social distancing from another person not in the same household.”

The ordinance provides exceptions including:

The proposed ordinance does not include a penalty, but anyone refusing to wear a face covering in public places could be prosecuted for other laws including trespassing, disturbing the peace, disorderly conduct.

“Our primary goal is education and I think we’ve had success with that community based approach,” Lyon said. “Businesses have done a good job following the ordinance and I think the same thing will happen with our citizens.”

If approved, the ordinance would be effective immediately and continue through November 30.

Midwest City saw low infection rates and hospitalization in the early months of the pandemic. Lyon said the city regularly saw less than 20 cases from March through June, but the numbers rose rapidly in the past month. As of Friday, Midwest City had 104 potential cases of COVID-19. AllianceHealth Midwest hospital had few or no COVID patients this spring but saw that number increase to as many as 17 in recent weeks, Lyon said.

“When we see the numbers go up in Midwest City, the numbers at the hospital has been going up too,” Lyon said. “We’re seeing younger people get it and their symptoms have been less severe.”

The Oklahoma State Department of Health releases daily reports on the number of potential cases. Debi Wagner, Midwest City Emergency Management Director, uses those reports to compile a list of all Midwest City addresses with potential cases of COVID. She said that ensures police and firefighters wear appropriate personal protective equipment if called to those homes.

Lyon said the city’s goals are to protect the public and protect businesses. He said he hopes a mask ordinance and social distance can help curb the rise of infections and hospitalizations. If not, he said they may consider more extreme action such as stay at home orders.

“The best case scenario is we can get our numbers back to where they were 30 or 45 days ago,” Lyon said.

The city council granted Lyon authority to issue ordinances concerning businesses and COVID-19. Any action impacting the public, such as the proposed mask order, requires approval of the city council.

On July 10, Lyon issued an emergency ordinance requiring all restaurant and bar employees to wear a face mask while at work. Masks are also required at City Hall and all city buildings.

The city council meeting is scheduled to begin at 6 p.m. Citizens can watch meetings live on the City of Midwest City YouTube channel.