Midwest City’s Christian Cook certainly made the most of his last appearance as a high school basketball player at UCO’s Hamilton Field House Saturday afternoon.

Cook joined the Del City duo of Demontreal Crutchfield and Nathaniel Goodlow on the Large West All-State basketball team that was played at UCO after being cancelled at its usual site at Oral Roberts Mabee Center. 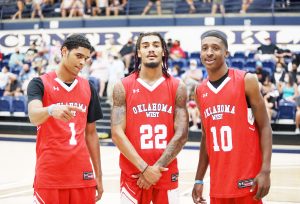 The East won the game, pulling away for an 89-84 victory with a fourth quarter surge.

But Cook, a three-year starter for Dwayne Bradley at Midwest City, almost single handedly matched the East in the fourth quarter with 12 of his game-high 22 points in the final five minutes of the contest.

“That was fun. It almost seemed too easy at times. It was special, the ring, the uniform, the tradition and honor and I was proud to have Coach Bradley here for me in my last high school game.
“I learned a lot from him and he’s special to me and lots of others. I’m anxious to get on to Tahlequah and get started on my college career. I want to thank everyone for all the love and support I’ve had while a Bomber,” he added.

The Del City boys gave the game a distinct Mid-Del flavor as Goodlow led all rebounders with 7 and added 6 points while Crutchfield added a trey and two field goals for 7 points.

“I feel better about not getting to play in the state championship since we at least got to play in the all-state game,” Crutchfield said. “I had fun playing here today. They let me and Nate (Goodlow) sub in together so we could play our last game together.”

The East jumped out to a 78-67 lead with four minutes left to play before Cook went on his rampage.
He stole the inbounds pass and promptly drained a three from the win and followed up with a steal on the defensive end and connected on both free throws when fouled on the layup to cut the margin to 78-72.

Cook then swished another trey and added two free throws to complete a 10-0 run and cut the margin to three before the East answered with a parade of free throws for the final margin.

The teams were divided into two squads and rotated every four minutes on the clock. Cook got the first basket of the game but the East answered with six points. Kendural Jolly of Putnam City West and Ashaunti Hunter of Lawton Mac joined Goodlow in sparking a rally that pulled the West to within one at 21-20 after the first quarter.

Jolly had a pair of treys to open the second period, Cook and Cash Novotny of Anadarko each drilled a trey and Crutchfield had the go-ahead bucket as the West rallied for a 41-40 lead by intermission.

Crutchfield had a three and a layup, Goodlow converted a steal into a layup and back buckets in the third period, but Davon Richardson of Sand Springs who is headed for UCO to play for Hoffman, countered with 11 points and Mason Alexander of Tulsa Edison had 13 to push the East in front, 63-58, going into the final stanza.

Then Cook and Co. couldn’t quite get over the hill in the final stanza.

Cook will be joining Coach Jerry Havens and the Northeastern Oklahoma RiverHawks (formerly Redmen) for his first year of college ball next week. Crutchfield will play for Seminole State this fall and Goodlow is headed for Northern Oklahoma at Tonkawa.

“It felt good to be back on the court for the first time since March,” Goodlow said. “It was fun playing but you always want to come out with a W.”

SMALL EAST defeated the Small West, 85-75, in the second game as Jaxon Wiggins of Roland led the way with 16 points, Leading the way for the West were Myles Jeffries of Millwood with 16 and  Jameson Richardson of Duke with 14.

Putnam City native Bob Hoffman will soon begin his first year at the helm of the UCO basketball program. He and his staff deserve a big pat on the back for hosting the All-State game and allowing these players to receive the well-deserved honor.

The crowd of close to 1,000 was fully masked, observed social distancing and was very well behaved.

Everyone was absolutely overjoyed that some form of high school sports has resumed.