Eastern Oklahoma County’s new turnpike is expected to begin opening in coming months, and officials say that roadway will open with a speed limit of 80 miles per hour. 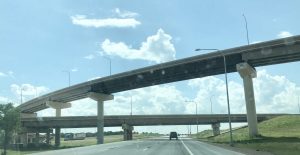 The new Kickapoo Turnpike crosses I-40 which will soon allow quick access to I-44. (PHOTO BY RYAN HORTON)

The Oklahoma Turnpike Authority announced July 28 that rural segments of several Oklahoma turnpikes now have the green light for a higher maximum speed limit, and that includes the entire eastern Oklahoma County corridor, once open.

In total, OTA approved the proposal to raise posted speeds from 75 mph to 80 mph on rural segments of five turnpikes.

These locations total 104 miles and include: 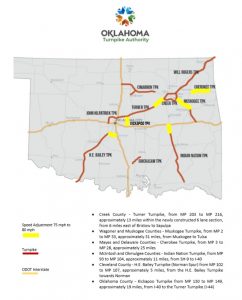 Officials say the change won’t impact urban areas, and all drivers should keep a close eye on their speedometers as changes are made over the next several months.

“With today’s approval, work can begin to manufacture and install the new 80 mph signs for each of these corridors. This process could take several months to complete. Until the new signs are in place, the Oklahoma Highway Patrol says it will be enforcing the current posted speed limit. Drivers will need to pay attention in the corridors before revving up or else they’ll risk a ticket,” noted the OTA.

The Kickapoo Turnpike project was announced in October of 2015, and should meet the initial goal of being complete in 2021.

The 21-mile stretch of toll road has been making rapid construction progress in the Harrah area since work first began in 2018.

The Kickapoo Turnpike is one of four large-scale turnpike corridors under construction as part of the Driving Forward initiative, according to the Oklahoma Turnpike Authority.

The OTA reports the project will allow for a high-speed connection from eastern Oklahoma County to two major intersections for travel.

Once open, the new toll road will produce a drive-time reduction to access Tulsa from the Oklahoma City metro area, and alleviate current congested traffic inside Oklahoma City.

The toll road was designed to feature four interchanges including SE 29th Street, Reno Avenue, NE 23rd Street and Britton Road. Those east and south running roads that do not have an interchange with the toll road will run either over or under the new turnpike.

For more information about the Kickapoo Turnpike and other OTA projects visit DrivingForwardOK.com.