The West beat the East in the Oklahoma Football Coaches Association All-State Football Game held at Oklahoma Baptist University last Saturday evening.
The East threatened late but fell by a final score of 21-13. 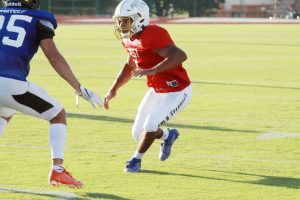 Tuttle receiver Parker Ross set up the first score of the game, getting a 30-yard reception from first and ten at the 20-yard line with 1:37 left in the first quarter.

The West scored first, early in the second quarter, off a quarterback keeper by Weatherford’s Jaxon Ratteree.

The East only earned one series in the first quarter, and it was short lived.

However, with 2:14 left in the second quarter, the East scored, hitting a receiver deep on the sideline. A failed point-after attempt led to a 7-6 halftime score.

An interception by Carl Albert’s Traylor, taken back past midfield to the enemy 23. The West converted, but soon turned the ball over on downs at the opponents seven. With 2:52 left in the third quarter, the East took over on offense and scored a 34-yard touchdown pass to close out the third quarter, 13-7.

Moore’s Jayce Gardner carried it across the goal line for the West, scoring a 2-yard touchdown. That gave West a lead they cemented about halfway into the fourth quarter with a short pass from Ratterree to Sam Brandt. 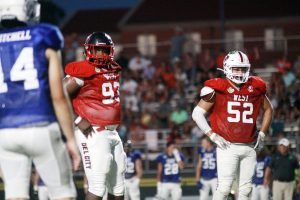 Coaches after the game spoke about what it meant to see their players represent their schools one more time.

Carl Albert coach Mike Corley was in attendance to see Carl Albert players Traylor, who had two interceptions in the game, and Collier.

“It’s exciting to see both of these guys get to compete one final time in high school and get rewarded for all the hard work they put in over the years,” coach Corley said. 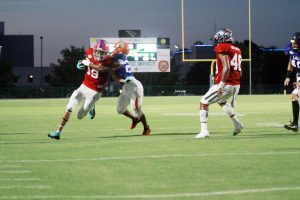 Carl Albert’s Jayveion Traylor helps the West claim a win over the East at the 2020 All-State game.
(PHOTO BY JAYSON KNIGHT)

Del City coach Mike Dunn said before the game, “The coaches association all state team is the ultimate reward for kids, in my opinion. It’s actually voted on by coaches who have seen the kids either play in person, or through submitted film. We were fortunate to have two players selected this year and both are very deserving. Kyshon Murray and Kyren Williams were both captains for us last year. They’ve both done everything we’ve asked them as players and as young men. I am extremely fired up to watch them both represent Del City football one more time! They are first-class people and I know they’ll represent us by playing hard and having fun.”