The police department and the Mid-Del School District approved an agreement to add the officer. 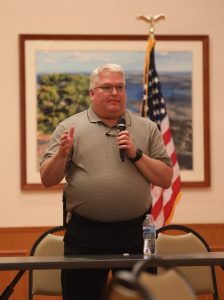 Chief Steve Robinson said the school resource officer would be under the authority of the police department. He said he has selected an officer for the new position but would not announce who.

“This will not be someone that comes in off the street and we give them a gun and badge,” Robinson said. “The SRO officer has over 10 years of experience and it will be the same with the other position. It will be an experienced officer.”

The Mid-Del School Board unanimously approved the contract agreement at the virtual meeting on July 22. Cordell Ehrich, assistant superintendent for teaching and learning, expressed his appreciation to the City of Del City for making it happen.

“This was a team effort but a lot of hard work for the police chief and city in general and I just want to say a huge thank you to them for this,” he said. “It will have a big impact and will be positive for students. We’re excited for the opportunity.”

Mid-Del Schools will pay $7,500 each month for 10 months, for a total cost of $72,500. The district will pay for the program through its general fund account.

According to the agreement, the school resource officer’s primary function includes ensuring the safety of the students and faculty and provide campus security.  The officer will assist in limiting access to the school grounds to authorized people, investigate criminal acts on school grounds and serve as a liaison between the school, police department, and the juvenile justice system.
The officer will not be involved in ordinary school discipline, unless students may be at risk of harm and when requested by the principal or designee.

The officer will work at the school during instructional days from August through May. When school is not in session, the officer will be assigned other police duties with the city.

Mid-Del Schools will now have a school resource officer at all three high schools. The district started the program at Midwest City High School and added an officer at Carl Albert in 2019.