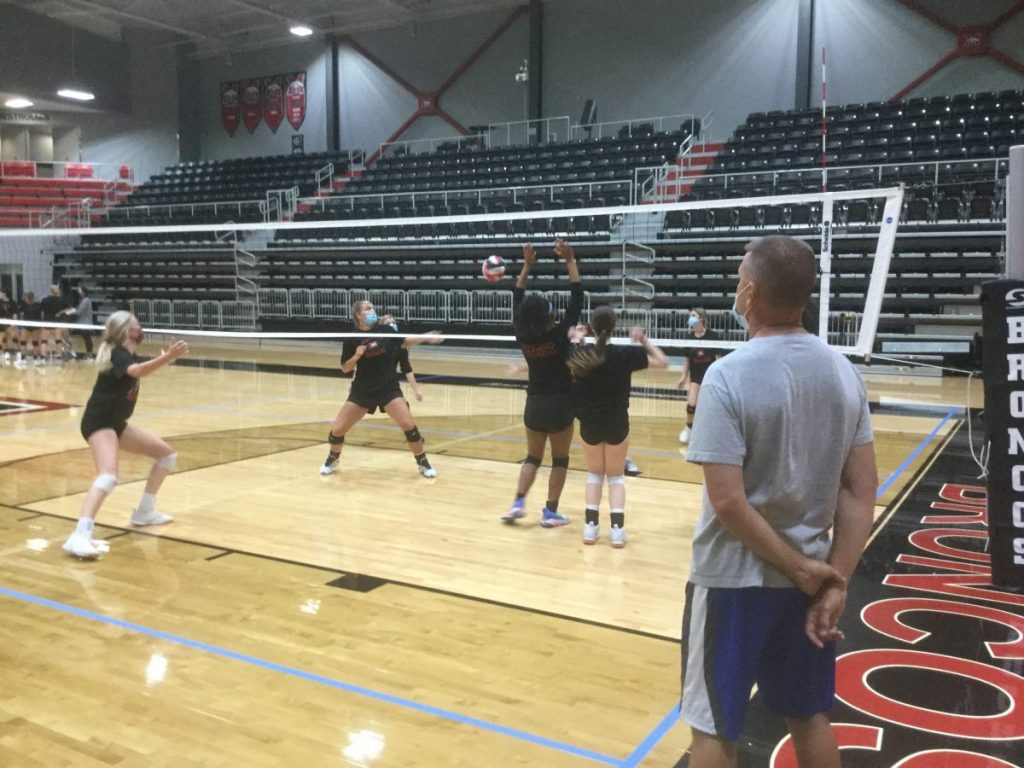 The Mustang Lady Broncos volleyball team’s mission is clear this upcoming season: Return to State. This year’s squad doesn’t mince words when talking about the team’s chances of returning to the dance. And neither does head Coach Steven Hajek, who likes his team’s chances this season. “We’re pushing to get back to state,” said Hajek. “We lost four seniors last year, but we gained a couple of players through move-ins. We have three seniors on this team and some good young players. We have a good balance this year.  We’re going to be very competitive.”

The three seniors figure to be key contributors to the team. Madelyn Booth, Ruby Kelley, and Annabeth Fehrle are fierce hitters with a lot of experience. Junior setter Casady McKinney is one of the best in the state. The Libero position is up for grabs, and two players are vying for the spot left by all-stater Madison Hajek, daughter of the head coach. Coach Hajek understandably didn’t wish to reveal their names at this time, as well as the names of couple of ‘sleepers’ that Hajek is hoping will do great things for the team.

Late last week, Booth was named captain of the Lady Broncos, an honor that Booth knows comes with responsibilities. “I have to build bonds with all of the girls,” said Booth “Especially the ones who have a little more trouble communicating. I have to know which girls just need supportive talk and which ones I need to get on to a little bit.”
Like her coach, Booth is excited for the season and believes her team can realize their goal for the year. “I think we’re going to be respected by the other schools now, and I really believe we’re going to make it back to state.”

Kelley echoes the sentiment of her teammate about the Lady Broncos’ prospects for the season. “The attitude is there!” said Kelley. “We’re a little bit inexperienced, but our scrappiness is good. I think we’ll make it back to state, and I think we’ll have a really good time.”
Hajek knows only time will tell how good this team is. “We’ll know more about our potential after the first scrimmage next week,” said the coach. “From what I’m seeing so far, I’m really excited for this year. I think we will return to state.”