Thursday was a busy night for the Mustang Chamber of Commerce. 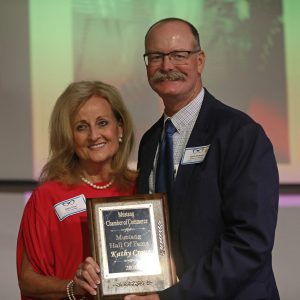 Kathy Crout is inducted into the Mustang Hall of Fame by County Commissioner David Anderson. (Photo by Jeff Harrison)

The group celebrated accomplishments over the past year, looked towards the future and had a little fun in the process during their 47th annual awards banquet and auction at The Venue at The Bridge Church.

Kathy Crout was inducted to the Mustang Hall of Fame. David Anderson, chair of the Hall of Fame committee, said Crout is a “prayer warrior” who has served behind the scenes for years helping the community grow.

“She has been and remains to be the loyal, quiet, humble, tireless citizen for the community that she loves,” Anderson said. “And as a community I know we love her.”

State Sen. Paul Rosino was named the Mustang Ambassador for representing Mustang beyond the boundary of the city.

Michelle Landolt, of Papa Murphy’s, was named the Outstanding Member. She is active in the community supporting various school groups, 4-H and ag programs, while also working at the FAA and owning a small business with her husband.

City Manager Tim Rooney was selected to serve another term as Chairman of the Mustang Chamber of Commerce board. Chamber CEO and president Renee Peerman introduced Rooney and presented him with the gavel.

Rooney reflected on the past year that included festive celebrations for Western Days and Mustang’s 50th birthday, as well as sadness for the loss of longtime community supporter and business leader Robert Crout.

“He was in so many ways like a founding father to Mustang,” Rooney said.

Rooney said juggling duties as chairman of the chamber and city manager during the COVID-19 pandemic has been interesting and challenging. During this time, he said the community has showed its compassion and resilience. That has included people delivering meals to the most vulnerable citizens, businesses adapting to the “new and ever changing normal,” people staying in contact with loved ones through video chats, and Mustang residents supporting local businesses.

“We all got to witness Mustang at its best in this pandemic,” he said.

Rooney challenged people to bring a positive approach towards making the chamber and the community better this year.

The evening also included a large silent auction and spirited live auction. Tom Manske was the live auctioneer and Michael Ray served as the emcee. The auction raised $16,760.