By a split vote of 4-3, Choctaw became the ninth municipality in the Oklahoma City metro area to pass a mask mandate.

However, that mandate won’t be in effect until Sept. 5. 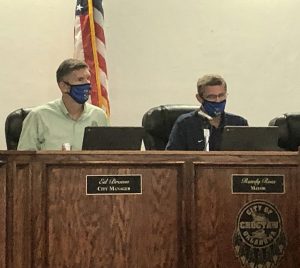 Choctaw City Manager Ed Brown and Mayor Randy Ross partake in the Aug. 6 special meeting to put a citywide mask mandate in place. The mandate passed 4-3 and will be in effect 30 days after approval until at least Oct. 6. (PHOTO BY RYAN HORTON)

When city leaders met in late July to consider a mask mandate, the Choctaw City Council instead moved to pass a resolution instructing all businesses to post a notice at their door either requiring a mask or asking patrons to follow Centers for Disease Control and Prevention guidelines, regarding face coverings, washing hands and social distancing.

However, city leaders in support of a full mandate made clear their intention to revisit the issue if COVID-19 cases continued to rise in the area, and the compromise proved to be short-lived.

However, with a 4-3 vote, officials failed to meet the supermajority required to pass the accompanying emergency clause. That means the ordinance won’t be in effect until 30 days after approval.

The ordinance, which resembles those passed in Oklahoma City and Midwest City, shall remain in effect until at least Oct. 6 or the expiration of all COVID-19 emergency orders in the state.

When in effect, a covering that covers a subject’s mouth and nose, must be worn by most people in most public settings within the city limits.

The ordinance has a long list of exemptions, and also doesn’t have a set fine for violation.

Both issues were addressed by councilmembers in opposition of the ordinance as written.

“If this was truly about saving lives and a health emergency, we wouldn’t have an exemption for this. If this were truly about safety, we’d need to remove all the exemptions from this. There’s no exemptions for seatbelts, because that was passed for safety,” said Williams. “Strongly recommending should be the way we go about this. Yes, I believe we should wear a mask. Everyone should wear a mask, but absolutely mandating it is the wrong way of doing it.”

Businesses and private property owners can already have people removed or charged with criminal trespass for not wearing masks or failing to comply with other rules and regulations put in place on that property.

“If most of the stores are already requiring a mask, and we’re not going to go around fining everybody I don’t see what this is going to change,” said Ward 3 Councilwoman Jeannie Abts.

As written, the mandate was set to expire two months after the Aug. 6 meeting. Abts motioned to change the ordinance to just 30 days, but that was rejected gaining only Williams’ support.

“We said two weeks ago if the numbers didn’t go down, we’d revisit this,” said Ross. “I see a lot of people wearing masks, but not all of them. Everyone is saying you need to wear a mask, and many of them are saying they need to be mandated. These are people at the top. I wasn’t for this two weeks ago near as much as I am now. Think of your neighbors.”

Other councilmembers in support of the mandate echoed that concern about rising case numbers and safety of the community.

According to the Oklahoma State Department of Health, Choctaw had 18 active cases of coronavirus when the mandatory posting of CDC guidelines was passed, and 29 active cases two weeks later when the mask mandate was approved.

When the council met July 21, Choctaw had 93 reported cases of COVID-19, and of those 75 patients had already recovered and two had died, according to the state health department.

To be considered a recovery, OSDH requires the person to not be hospitalized or deceased after 14 days since the onset of symptoms.

It should be noted that sorting OSDH cases by zipcode paints a more accurate picture of coronavirus numbers by address. The Choctaw zipcode (73020) covers an area about twice the size of the municipal boundaries of the City of Choctaw, which is the area that would be affected by any mandate.

Phil Maytubby, with the Oklahoma City-County Health Department, was in attendance to give an informative question and answer talk and advocate for the mask mandate before council took the vote. 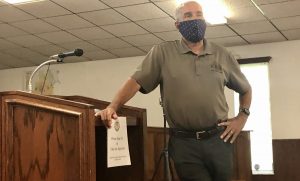 Phil Maytubby, with the Oklahoma City-County Health Department, addresses some public questions before the Aug. 6 vote. (PHOTO BY RYAN HORTON)

“We’re not trying to be alarmists. We just want to protect everyone the best we can,” said Maytubby. “When you’re out in public you may be standing next to someone who is asymptomatic or presymptomatic. That means they don’t even know. That’s fine for the healthy people, but it’s not for the people they get around that have health issues. The mask takes care of all of that. Mask wearing reduces our transmission by about 70 percent, especially if both people have a mask on. Distance helps as well, and that’s why we still recommend distancing even with a mask on.”

Several citizens were in attendance to voice their opposition to what they view as an overreach of local government.

The effectiveness of any such mandate, and the cost to taxpayers was also repeatedly questioned.