The award was to cover all of Sharp’s legal fees.

Additionally, the court imposed a sanction of $500,000 against Epic. 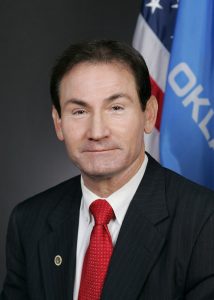 The lawsuit filed against Sharp late last year, alleged the senator’s statements criticizing Epic were defamatory. The award of attorneys’ fees and imposition of sanctions follow Judge Truong’s dismissal of the lawsuit under the Governmental Tort Claims Act (GTCA) and the Oklahoma Citizens Participation Act (OCPA).

The OCPA is an “anti-SLAPP” law enacted by the Oklahoma Legislature in 2014 to “encourage and safeguard the constitutional rights of persons to petition, speak freely, associate freely and otherwise participate in government to the maximum extent permitted by law and, at the same time, protect the rights of a person to file meritorious lawsuits for demonstrable injury.”

The OCPA requires a court that dismisses a lawsuit under the statute to award attorneys’ fees to the moving party. It also requires that the court impose a sanction against the party that filed the action to deter similar lawsuits.

Senator Sharp says he is pleased with the result in this case and will continue to work to ensure proper oversight and use of state funds on behalf of his constituents and the people of Oklahoma.

The Oklahoma State Bureau of Investigation has an ongoing investigation into allegations of embezzlement, racketeering and forgery by top executives at Epic and willful neglect by members of its independent governing board.

Also, a year ago Governor Kevin Stitt requested an investigative audit of Epic and related entities by State Auditor and Inspector Cindy Byrd. The Oklahoma Attorney General’s Office is still battling in court to try to compel Epic Charter Schools’ for-profit operator to comply with the investigative audit.

Late in 2019 Epic issued cease and desist letters and then filed the lawsuit, seeking at least $75,000, from Sharp after the retired educator began a series of releases last July questioning millions of dollars in state funding used by Epic Charter Schools.

“It’s disturbing that a school district would tell a member of the Appropriations Subcommittee on Education to stop doing their constitutionally-mandated job, which is to oversee and ensure that all Oklahoma schools are following the law and efficiently and legally utilizing state funds,” responded Sharp to the initial cease and desisit demands. “Hopefully, the OSDE’s independent audit as well as the OSBI’s and federal Office of the Inspector General’s investigations into Epic will be concluded soon. This has become a very expensive ordeal trying to figure out what led to these questionable actions and why there hasn’t been proper oversight of the school.  Obviously, more legislative steps need to be taken to ensure full accountability and transparency within our charter and virtual charter school systems in the future.”