District 17 State Senate Republican candidate Shane Jett has filed a lawsuit against the Chairman of the Citizen Potawatomi Nation.

Jett claims he was wrongfully terminated after expressing his opposition to a COVID-19 mask mandate in Shawnee.

Jett, a citizen of the Cherokee Nation, alleges Barrett fired him due to political differences. 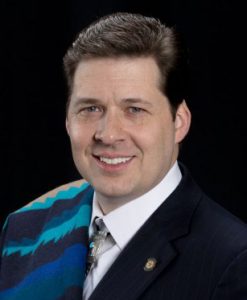 “Last month, I attended a meeting of the Shawnee City Commission to express my opposition to a proposed mask ordinance for the City of Shawnee.  This massive government overreach was opposed by most citizens and I wanted to be sure that their voice was heard at the meeting. Therefore, as a private citizen on my private time, I exercised my Constitutional right to free speech and spoke in opposition to the mask mandate,” said Jett, in response to the filing.

“The Chairman of the Citizen Potawatomi Nation who also serves on the board of my employer, the Citizen Potawatomi Community Development Corporation (CPCDC), took offense to my comments.  Even though, I had not willfully violated the mask mandate at my job or on CPN land. I have been respectful of the municipal and posted mask ordinances and have been very conscientious about both the health risk and anxieties of others.”

Jett was hired as CEO of the Citizen Potawatomi Community Development Corporation in 2011.

He stated in a news release that he believes he is a victim of an unlawful political attack.

“After numerous attempts to reason with Chairman Barrett and other elected CPN officials, it became clear a lawsuit was the only way to protect me and my family. The Chairman is a well-known partisan Democrat and attacked me for speaking out. He attempted to fire me without proper protocol. Therefore, I filed an action in tribal court seeking to stop his unlawful actions,” said Jett.

Barrett did not say why Jett was fired, but denied his termination was politically motivated.

“I knew that Shane was an ultra-conservative Republican when I hired him 10 years ago,” said Barrett. “In addition, he worked here before, during and after his run for the 5th Congressional District in 2014 as a Republican. Why would I wait more than seven years to fire him over his politics? Obviously, the reason was something else altogether.”