Del City has found a new developer for a pair of city-owned properties.

Tom Leatherbee, community services director, said he is confident about working with the developer and he praised them for past projects in the city. 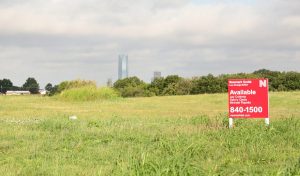 Del City has selected a new developer for a city-owned property near I-40 and Scott Street. (Photo by Jeff Harrison)

The Edmond based company has also developed residential projects in Harrah, Edmond and Oklahoma City.

The letter of intent says the developer will work towards an agreement to buy and redevelop the properties. The developer must present a redevelopment plan by Nov. 15. The agreement also gives the city manager, staff, and council the authority to work on an agreement for the sale.

“This will allow them months to negotiate with potential users, to get their engineering in line and develop a basic site plan,” Leatherbee said.

Del City has been working on redevelopment of the Scott St. property for several years. The city demolished an old apartment complex and gas station on the site and relocated power lines that ran through the property. They expanded the redevelopment site by acquiring the former Fantasy Island strip club through eminent domain and razed the building.

In August 2017, the city hired Hunt Properties to develop the property. Plans included a movie theater, entertainment complex, grocery store and others. A little over a year later, the city scrapped the deal.

“The economic development was not moving forward in the way the city wanted and with the urgency they wanted,” Leatherbee said.

Leatherbee said they have received interest from several developers but liked RCL’s plan that best maximized the property for redevelopment.

“Their plan was the most comprehensive and used most of the land,” Leatherbee said.

The project on SE 29th St. will be a primarily residential development with mostly single-family homes. It will also include some commercial and retail areas and possibly some independent or senior housing, Leatherbee said.

“This is very exciting because it gives the city the opportunity for new homes in an area that has not seen any new residential redevelopment for years,” Leatherbee said. “And the lots will be larger than you normally see in Del City.”

Both of the Del City properties are partially located in a flood plain and will require drainage improvements. Leatherbee said RCL has experience working in flood prone areas such as the land for The Shoppes at Del City.

“We had to take the entire property out of the flood plain and work on the creek and detention area, which requires a lot of regulatory work,” Leatherbee said. “That would scare off a lot of developers, but this developer has experience and it should be very beneficial.”