CHS was competitive all night as the varsity matchup went to five sets.

Mount St. Mary’s took the season opening win with a 15-12 score in the final set.

“They’re always really good. It was a good game. It was a pretty good performance for our first game, and I’m excited for our future,” said Lanham.

“We had some tittle things that are easily corrected. We hit a lot of balls long and have to work on correcting. They’re a really good team, and we’re proud of how we played. Compared to last season’s opening day we looked pretty good. We worked hard, and never gave up. We kept a positive attitude, and in a tough loss like this that’s good early in the season. We have a positive outlook and I’m excited for them.” 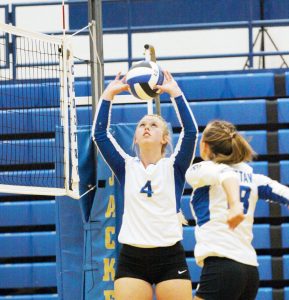 The CHS lineup features five seniors and plenty of youth.

Those seniors are joined by three juniors and three sophomores.

Earlier in the night Choctaw’s freshmen team won 2-0, and the junior varsity lost in the third set vs. Mount St. Mary’s.

A large early August crowd made coaches confident people are ready to get out and watch some sports since COVID-19 has been ruining schedules since March.

“We had a lot of people here including some of the student body. That’s a good sign to get rolling before school has even started,” said Lanham.

The CHS coach says the uncertainty about the fall sports schedule still has everyone concerned.

“We canceled the big scrimmages we had scheduled, but we did get two regular scrimmages. We played CHA and the Storm, and we did pretty well,” said Lanham. “As of now our tournaments are still on. We just have to see what happens.”

The first tourney for Choctaw is the annual visit to rival Carl Albert, a team the Lady Jackets always try to face early in the season.

“I like the coaches over there, but it’s a good rivalry for the kids. We always have a big crowd there and they always bring a crowd here,” said Lanham.

Choctaw faces the Titans on the road this year Tuesday, Aug. 18.

Aug. 21-22 Choctaw should return to CA for the annual tournament.

Photos of CHS vs. Mount Saint Mary by Ryan Horton