A local group of Jeep enthusiasts are rolling through towns honking horns and waving flags in support of law enforcement. 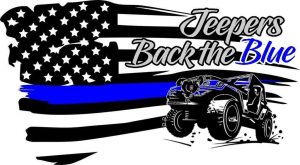 Jeepers Back the Blue is a an organization of multiple Jeep clubs that get together to support law enforcement through a large parade of Jeeps. 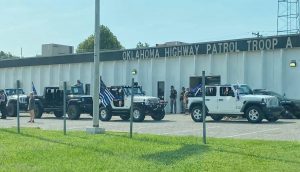 About 140 Jeeps came by Oklahoma Highway Patrol Troop A Saturday as one of the stops on the Back the Blue rally.

The convoys have reached up to 259 Jeep owners waving and showing support for local law enforcement.

“Everybody’s flying blue line flags or they’ve got blue lines on their Jeeps. Like blue painters tape or they’re flying an American flag. We just kind of go in a long line and we’re stretched out for four or five miles,” said Valerius.

The convoys drive right up to the police stations so officers can wave and see all the great support.

“We pretty much overload their department parking lots. We parade the departments basically honking horns and flying flags. We go say thank you and support them. A morale booster for them,” said Valerius.

The reaction from law enforcement has been outstanding and very appreciative.

“We’ve had departments tell us – you guys don’t even have any idea what this means to us. They’ve spent thirty days being spit on and having derogatory comments made to them. For us to show this type of support they are just immensely grateful,” she said.

People in the communities also enjoy seeing the large parade of Jeepers Backing the Blue. 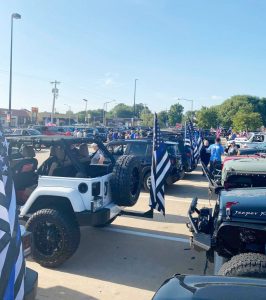 Local Jeep owners join in a show of respect for law enforcement.

“They honk and they wave. We pulled up to a light today and a little lady pulled up next to us and started clapping. The truckers are crazy honking and blowing their horns. People will drive by and they are waving and honking. Just really good reception. But there’s no accolades deserved to us. It’s simply to show support to these guys for what they do,” said Valerius.

Jeepers Back the Blue members are having a great time supporting law enforcement and already in talks for possibly more events.

“We’ve had a great response with the Jeep community and everybody likes to get out and show support. And that’s just what it’s about,” she said.