A year after Nicoma Park started work on a new waterline and tower project, the system should be fully operational.

The small eastern Oklahoma County city broke ground on its first citywide water project in September of 2019, and officials say that system will be operational by the end of August.

“They just finished repainting the water tower so it says Nicoma Park on both the west and east side. Everything is installed, and they’re just waiting on some tests and then they’ll fill the tower,” said Nicoma Park mayor Brian Foughty. “Everything should be fully operational by the end of August.” 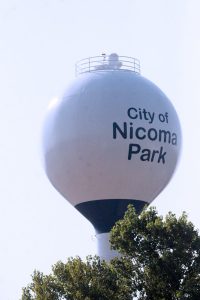 The Nicoma Park water tower now stands south of NE 23rd Street. The tower should be filled and operational by the end of August. (PHOTO BY RYAN HORTON)

In 2014 the citizens of Nicoma Park voted to approve a sales tax to fund the construction and maintenance of a waterline along NE 23rd Street.

With funding assistance from the Oklahoma Water Resources Board, Nicoma Park is making good on that commitment.

“All of 23rd Street will be hooked up within about six months. Connecting along Westminster and 10th will now be optional and available,” said Foughty.

Nicoma Park’s schools are currently connected to Midwest City waterlines, but those connections will easily be changed once the city’s new system is fully operational, explained Foughty.

The small eastern Oklahoma County city has an area of just over three-square miles and a population of around 2,500, but efforts have been made in recent years to take advantage of the plentiful traffic provided by Highway 62.

With two water wells, a chlorine booster station and a water tower the city will be able to more effectively access fire hydrants.