By John Martin
Staff Writer
First-year coach Chris Bliek and his hearty band of Harrah Panthers didn’t get any favors when the Oklahoma Secondary Schools Activities Association released the revised football districts for the next two years.

The Panthers are still in 4A-2 which has been dominated by Blanchard, Bethany and Tuttle the past few years, but the case of surrounding teams has undergone a major change.

McLoud dropped to 3A but remains on the Panther schedule as a non-district foe, replacing Anadarko.

Madill also drops to 3A and Bethany moves to 4A-1 to align with the schools on the Western side of the metro.

So, look who’s back, none less than the Ada Cougars, who seem to yo-yo between 4A and 5A every few years. The once mighty Cougars, whom the Panthers battled for supremacy (and won!!!) during the Grant Martin era, have fallen onto hard times in recent years and finished 5-5 and failed to make the playoffs in 2019.

Playing all those inner-city Tulsa schools is not good for your ego, especially if your talent level is slipping.

But make no doubt about it. When the Panthers journey to Ada on Thursday night, Oct. 15 during Fall Break, the stands will be full and there will be a field full of maroon jerseys and it will be tough. 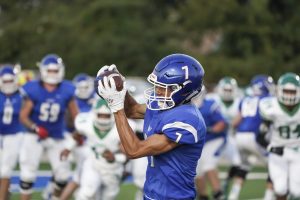 ANOTHER TOUGH playoff-tested team will be moving up from 3A with the John Marshall Bears, who compiled a 7-4 season and lost to power-packed Plainview in the first round of the 3A playoffs.

The other new member of District 4A will be the Classen SAS Comets, who just rejoined the OSSAA after going the independent route for a few years. Classen will be the district opener for the Panthers on Sept. 25 and could provide the springboard for the Bliek Boys to get the district play off on a winning note.

In his first year as a head coach, Bliek offers a stark contrast in the season opener where Seminole head coach Mike Snyder is Oklahoma’s all-time winningest high school football coach and was the Chieftains’ head coach before Bliek was even born.

The Chieftains were 5-5 a year ago and missed out on the playoffs, but Snyder was a Holdenville Wolverine before he became the MAN at Seminole and his team will be ready for the season opener at Seminole on Sept. 4.

Next up will be a new team on the schedule, Bridge Creek. The Bobcats are classified in 3A and had a 3-7 record a year ago. McLoud, which lost all 10 games in 2019 including a thrilling 21-20 decision to the Panthers for the team’s first win on the new Evans Field turf, will be ready for the Panthers.

The two inner-city schools, Classen and John Marshall, will launch the district schedule for the Panthers followed by Tuttle, tabbed a co-favorite with Ada in the preseason polls to take the district crown.

The Tigers were 11-2 a year ago, defeating Chickasha and Broken Bow before falling to Weatherford in the state semifinals.

The final three teams on the district slate were all surprise teams a year ago, Tecumseh (7-4) and Cushing (4-7) both clawed their way into the playoffs and league co-favorite Blanchard finished at 4-6 and did not advance.

The Panthers have had a COVID-19 free Summer Pride, an impressive pre-season prep time and Bliek and his staff are excited about the product they are going to put on the field to represent Harrah.

New coach, new offense and inexperienced team were all factors in the Harrah Panthers’ offensive output for the 1-9 campaign in 2019.

But in all the confusion caused by the COVID-19 scare, the Panthers are looking for all that to change during the 2020 season as Harrah celebrates its 100-year anniversary as a school district.

Chris Bliek, who spent last season as a Panthers assistant, was elevated to the head coaching position early in the summer to replace his mentor Kenny Speer as the new head coach. It will be Bliek’s first job as a head coach.
Bliek’s ties to Speer run deep as Speer was his coach when Bliek played for the Henryetta Knights. Upon graduation from college, he joined Speer’s staff for six seasons at Antlers, then joined his staff as an assistant at Antlers He replaces Kenny Speer, who retired after one season at Harrah following six seasons at Antlers.

Bliek graduated from Henryetta in 2008.

So don’t look for a lot of changes, just a determined band of Panthers with a year of experience under their belt, tried and proven after laboring through a long season in which they scored 21 points against McLoud and 17 against playoff bound Cushing, but were shut out twice and scored only a single TD in the other six games.
Bliek’s boys will be missing do-everything Gage Payne and who could ever forget his winning leap into the end zone to score the winning touchdown to seal the Panthers’ first-ever victory on the new Evans Field turf?

But junior Nolan Boone, who grew up before our very eyes last year, is back to direct the Panther attack, stronger, more accurate and certainly more confident.
And the 6-0, 175-pounder will be joined by some very familiar faces in workhorse 5-11, 180-pound junior Nick Moore, who evolved as the HHS go-to ballcarrier, along with junior Mort Barber, seniors Anthony Portuguese and track star Damarion Cooper and slotbacks Ricky Bliek and Dominic Aguilar, who both have blazing speed and are durable to either run or catch the ball, but mostly block for their teammates.

Senior Greg Irwin, a 6-1, 200-pound senior fullback, will also do lots of blocking and provide inside power.

Senior Colton McElwee, a lanky 6-3, 189 pounder, will be Boone’s chief target in the passing game. All of the running backs can take turns lining up as wideouts, with Tyler Thomason, Colby Winstead, Logan Bundy, Keylin Hooks also in the mix.

6-0 junior Austin Coley will provide depth at quarterback behind Boone and also take his turn as a slot receiver on offense and could also see some action in the defensive backfield.

BLAKE TABOR could again anchor the forward wall from his center position, The versatile, 6-1, 200 pound senior can play center on offense, end or tackle in the defensive scheme and is also a reliable punter for the Panthers.
Seth Goodman, a 6-2, 255-pound senior is back for his third year as a starter. Dominant as a down lineman on defense, Goodman also is valuable in opening hole for the Panthers’ stable of running backs.
Depth will be the key for the “O” line for Bliek and his staff as senior 240-pounder Ethan Hairell, junior Ethan MeNeil, 6-1-235-pound junior Zeke Caldwell and juniors Bryce Walker and Joseph Norton will add size and experience on both sides of the ball.
The “new look” offense with some very familiar faces will get its first test on Sept. 4 at Seminole before launching a possible three-game winning streak with Bridge Creek at home, McLoud down the road and Classen, in its first season after four years of independent scheduling on the schedule is next on the schedule.

The Harrah Panthers defense has to get better in 2020.

And new coach Chris Bliek and his staff are working hard to accomplish that feat even with all the obstacles presented by COVID-19 which has disrupted every single aspect of getting a team ready for the football season.

But in his first season as a head coach, the 30-year-old Bliek has seen many positive accomplishments since taking over for his mentor Kenny Speer early in the summer.

“Our Summer Pride program was very satisfying, both to our staff and to the players. We had to adapt to a lot of new restrictions but the guys remained focused and dedicated and determined to improve.

“We have all the safety guidelines in place and the team has adapted, working from home and then conforming to social distancing while here. They are really good about taking all the precautions and focusing on getting ready for football at the same time,” he said.

The Panthers gave up an average of 37 points per game during the 2019 campaign but look for those numbers to go down during the upcoming season because many of the players who suffered through that dismal experience are back, a year older, bigger, stronger and determined to succeed.

Seth Goodman is ready for his senior campaign. The 6-2, 255 pounder is a three-year starter and can play any position in the defensive forward wall, but is a sack threat from his defensive tackle slot.

Goodman will be joined by an experienced crew which has put in the work to improve the Panther “D”. Seniors Ethan Hairell, Blake Tabor, Ryan Johns at nose guard and juniors Ethen McNeil, Elijah Aguilar, Zeke Caldwell, Joseph Norton and Bryce Walker, along with reinforcements from last year’s freshman squad will be ready.

Running back Mort Barber is 5-9, 175 but has no trouble moving into the nose guard slot when needed for the defense.

Damarion Cooper is a State Qualifier in the sprints and uses that speed on both offense and at an outside linebacker slot on defense along with senior Kyle Baker.

Again, some talented members of the JV and freshman squads will also be competing for field time.

COUNTRY CLASSIC McLoud and Harrah are a classic example of Jr. Bedlam, adjacent school districts with intermingling bus routes, kids that go to church together and a strong desire to win any athletic contest.

The Redskins have been in Class 4A the past two seasons and had won three games in a row in the heated rivalry going into last year’s wild and almost unbelievable 21-20 last gasp victory by the Panthers on their new turf Evans Field.

In fact, the Redskins hold a 7-5 edge on the football field in the past decade plus.

This year, McLoud is back down in 3A but the two schools kept the rivalry alive by moving the McLoud game to a non-district contest.

These two schools are only about 7 miles apart. McLoud used to throw red paint on the Panther logo on the North side of Harrah’s stadium the night before the big game. Harrah would burn HHS or something on the McLoud football field in return.

Both schools could have a losing record but it would make your year if you won the game. There is no trophy and the rivalry never has had a name.

It used to be called the Country Boy Classic since the grocery store was halfway between the two schools, but Country Boy is now Harp’s and McLoud vs Harrah seems good enough for a name.