As advertised, junior Carson May demonstrated his many elite skills Friday night as the Jones Longhorns belted Bethany, 31-7, in a David vs Goliath showdown between two elite teams at SNU Stadium in Bethany in Friday night’s long-awaited 2020 season opener.

Dave Martin’s Longhorns are gearing up to claim their seventh district championship in a row and are ranked No. 2 in the pre-season Class 2A rankings behind Vian while Bethany, coming off an 11-1 state semifinal season, holds down the No. 8 spot in Class 4A.

But it wasn’t even close. 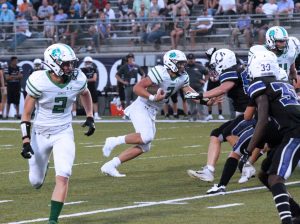 Cadyn Karl (2) looks on as Carson May (3) dashes to the end zone vs. Bethany.
(PHOTO BY RYAN HORTON)

After a scoreless first period, May found Game MVP Elijah Reed on a couple of ground gainers that resulted in a 31-yard field goal by Zachery Knox. After Kameron Estrada and Co. shut down Bethany without ta first down, May went to work again, igniting the two-prong running attack of Korbin Cox and Xavier Zachary and finishing off the drive on a keeper from 20 yards out. Knox made it 10-0 at halftime.

May connected with five different receivers for 19 completions in 28 attempts, resulting in two touchdowns and, for good measure, picked up another 100 yards rushing to personally account for 278 yards

Cox and Zachary added another 100 yards on 11 carries each and the versatile Reed added 14 yards in four carries.

Junior Kadyn Carl and Reed each pulled down 7 passes from May with Carl scoring on touchdown tosses of 5 and 55 yards for 86 total yards and Reed compiled 51. Tye Tucker celebrated a successful return to action, gathering in two passes for 22 yards and dominating his side of the field on defense.

Another defensive ace Trey Dorrell found time to catch a pair of passes for 19 yards and Cox caught a five-yarder coming out of the backfield.

Cox scored from the 4 to open the second half and after yet another defensive stop, May scrambled free and hit Carl in full stride across the middle for a 55-yard beauty. Of course, Knox was good on both PATs and also on Carl’s 5-yard TD in the fourth quarter for a 31-0 lead.

Bethany finally pushed across a meaningless tally in the fourth, too little, too late.

Game honors and Knox was the Special Teams honoree.

He was joined by Dorrell, Tucker, Cox, Max Wynn, Reese Webb and the entire Longhorn D group in completely shutting down the potent Broncs offense.

Things don’t get any easier for Martin and is crew as they prepare to journey up the Turner Turnpike to do battle with old nemesis Lincoln Cristian, which has handed the Longhorns their only regular season defeat each of the past two seasons.

AND….The Bulldogs are defending OSSAA State Class 3A Champions and now have a 15-game winning streak going. The Bulldogs are currently ranked No. 2 in Class 3A and had no trouble at all disposing of Class 2A power Beggs, 36-8 Friday night in the season opener.

Chase Hudson, who played fullback behind three-year starter Chase Ricke, is the new man at quarterback and connected with veteran receiver Kolbe Katsis for a 29-yard TD and scored twice himself in the first quarter to put the contest out of reach.

Veterans Tyler Johnson and Daymor Levell lead a defensive unit that held the explosive Beggs offense to under 100 yards.

Kickoff will be at 7 p.m. at Lincoln Stadium.