City leaders were criticized over decisions to postpone a “Back the Blue” rally and remove a sign that was placed in front of the police department.

Mayor Matt Dukes and the Midwest City Chamber of Commerce planned to host a “Back the Blue” rally Saturday at Joe B. Barnes Regional Park following a 5k fundraiser for a K-9 officer. The event was designed to be a way for the community to show appreciation for police.

Dukes asked the Chamber to postpone the rally due to recent events that have sparked nationwide backlash against police. On Aug. 23, a police officer in Kenosha, Wisconsin shot Jacob Blake, a 29-year-old Black man while leaning into an SUV. The incident sparked protests and violence across the country and led several professional sports teams to boycott games.

“I anguished over it a lot and felt like pushing it back a few weeks would let the dust settle down,” Dukes said. 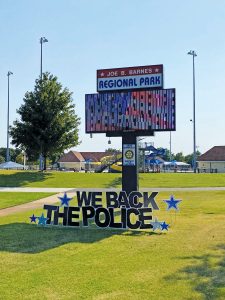 A sign supporting police was moved from City Hall to Joe B. Barnes Regional Park. (Photo by Jeff Harrison)

The next day, the Chamber had an executive board meeting and concurred with the decision to postpone, not cancel, the event. Dukes, who is a former Midwest City police officer and veteran, accepted all responsibility for the decision.

“That decision was made based on my input and I shoulder that responsibility 100%,” Duke said in a Facebook post. “It was based on safety concerns for our officers and our citizens. In emergency management it is called risk mitigation.”

The decision to postpone the rally caused backlash in the community, especially on social media.

“To think for a minute, I have abandoned my support, love and appreciation for the men and women of the Midwest City Police Department is absolutely absurd and ludicrous,” Dukes said in a Facebook post on Sunday. “The decision to postpone the rally, although angering was made from the concern for the officers and the citizens of this community.”

A new date for the rally has not yet been determined.

Last week, the Midwest City Chamber of Commerce placed a sign that read “We Back the Blue” in front of the Midwest City Police Department near City Hall. The sign was up for about 24 hours, before city officials had the sign removed and relocated to Joe B. Barnes Regional Park, near the intersection of Douglas and Reno boulevards.
City Attorney Heather Poole was concerned the way the sign was phrased and lack of proper permitting for it. City ordinances allow for community service messages to be placed on public property. A public officer may also request a sign be posted on public property. Dukes admitted he did not communicate with city management about the sign or a proper permit, but objected to the decision to remove it.

They agreed to move the sign to Joe B. Barnes Regional Park, which was the original site of the rally. Earlier this year, a group placed a sign supporting Midwest City employees during COVID-19 at the same location.

“I was concerned that the original message was pretty divisive,” Poole said. “So not being right here where people have to come and pass to conduct business at the city buildings, instead it’s at a main thoroughfare corner.”

City Manager Tim Lyon said he does not have any issue with the sign or its location. He said the sign was taken down for one day and modified to make sure the city complied with its ordinances.

“We support the police and the sign as it stands. Our police department is a model for the type of policing and the type of relationships that they have created with the ethnic populations in this community,” Lyon said.

Lyon is proud of the police department and its commitment to community policing and accountability under Chief Brandon Clabes.

“We are a model department and we’re doing many forward-thinking and community based policing techniques and reforms that some of the groups such as Black Lives Matters are asking for,” Lyon said. “And I’m really proud of that.”

Lyon objected to questions about the city’s commitment to public safety. He said the city has been working to restore funding to the police department budget for capital outlay projects, police officers and training. All city departments were required to reduce their budgets by 6% for the current fiscal year due to projected declines in sales tax revenue.

“I think my actions speak louder than any words I could post or print,” he said. “Those things came well in advance of the sign controversy.”

Lyon said he also supported the decision to hold a rally for police and is looking forward to the rescheduled date.

“We will do it and it will be well supported by the community,” Lyon said.