Not many teams have led Carl Albert at halftime in recent years.

Midwest City rattled the four-time defending state champions in the first half last Friday night. With 25 seconds left before the break, DeAngelo Irvin Jr. found Xavier Lee-Jackson open for a 43-yard touchdown and a 20-14 lead at halftime.

Even fewer teams have been able to hold a lead against the Titans. And Midwest City (1-1) was not one of them.

The Titans veteran offensive line and two-headed rushing attack of Javion Hunt and Kentrell Bizzell were too much to handle in the second half. Bizzell ran for two scores in the second half to help the Titans to a 41-26 win at Gary Rose Stadium.

“Carl Albert just dominated in the second half,” said Midwest City coach Darrell Hall. “They do what they do very well. They have two very big backs – guys that are going to bring the load – and they have a good line. And we didn’t make plays when we needed to.”

Hunt finished the game with 137 yards and a touchdown on 21 carries. Bizzell ran for 127 yards and two scores on 15 carries. 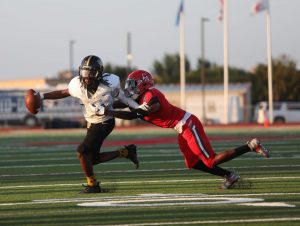 Carl Albert (1-0) struck first with a short touchdown run by Hunt on the opening drive. Jacob Eddy’s kick made it a 7-0 lead with 8:42 in the first.

Midwest City answered with a 79-yard drive later in the period. Makale Smith capped the drive with a 16-yard touchdown run. The Bombers couldn’t get the two-point conversion making it a 7-6 game with 1:15 in the first.

An interception by Lee-Jackson set up the Bombers second score. On the next play, Irvin pitched to Brian Wilson Jr. who fired it down field to a streaking Andre Miles and a 49-yard pickup. Kristawn Friday later powered into the end zone for a 5-yard score. Dylan Sebock caught the two-point conversion for a 14-7 lead with 6:05 to play in the second.

The Titans evened the score on a 10-yard touchdown catch by Lamereon Curry. But the Bombers struck again before the break. Irvin found Lee-Jackson for a 20-14 halftime lead.

Things started to slip for the Bombers in the second half. The Titans surged ahead with a couple of quick scores in the third. The team’s first possession ended with a 26-yard TD run by Bizzell. Two plays later, Dondi King scored a pick six for a 28-20 lead.

“We told them that if we turn the ball over as much as we did last week we’re going to get beat because they’re a better team than Westmoore,” Hall said. “And that’s what happened.”

Carl Albert added to its lead with a touchdown early in the fourth. Houston Russell kept the drive alive with a clutch 22-yard catch on third down. Will Batts capped the drive with a 3-yard touchdown catch to make it a 35-20 lead with 8:06 remaining.

Midwest City got back on the board after surrendering 21 straight points. Irvin connected with Smith for a 58-yard gain down the sidelines. The sophomore quarterback later dove into the end zone for a 10-yard score. A failed two-point conversion made it a 35-26 score.

Any hopes for a comeback ended with Bizzell’s second score of the game with 41 seconds left.

Irvin finished the game 10 of 21 passing for 193 yards with 1 touchdown and 2 interceptions. Smith was the leading receiver with 4 catches for 111 yards along with one rushing touchdown. Camarian Smiley had 53 yards rushing on 5 carries.

Friday led the Bombers defense with 11.5 tackles, 1 fumble recovery and 1 pass breakup. Juwan Dancy had 9 tackles, Arthur Broiles had 8 and Brandon Wright had 7 including one for a loss.

Midwest City will hit the road again Friday to take on Noble in the final non-district game of the year. Carl Albert is at Del City.