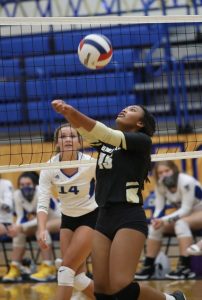 The Choctaw volleyball team made sure senior night was a special one.

Choctaw took control in the first set with help from seniors Josie Thomas, Quytana Bateson, Jacey Simons, Logan Hausman and Mackenzie Stover. All five stayed on the court for the entire first set.

“When we got them in, they worked hard the entire time and the score reflected it,” coach Larry Lanham said.

Midwest City bounced back in the second set and kept it close early on. Jade Singleton served up the first three points. Ki’Aunnau Chandler scored with a powerful kill that went through a block and Kashiya Birdsong added an ace to make it a 9-7 score. Choctaw finished strong and closed out the set on a 13-3 run.

After starting slow, Midwest City tried to rally in the third. Chandler scored back-to-back aces to cut Choctaw’s lead to 12-7. But the Lady Yellowjackets got hot again as they reeled off 15 straight points for the 25-10 win in the third.

Midwest City went 1-1 last week. They swept Star-Spencer at home on Sept. 1. Coach Nikki Montes said she is pleased with her team’s ability to both win and improve on the court.

“It was a game where we were able to focus on a lot of things that we are continually improving every day,” said Nikki Montes. “We worked as a team and were able to come out with a victory. Everyone had a new role on the court due to some being injured. They stepped up and were able to handle these changes.”

Midwest City is scheduled to play Del City on Thursday. Choctaw is set to travel to Enid.