A federal judge partially dismissed a lawsuit filed by the owner of the Heritage Park Mall against City of Midwest City and several of its employees.

Ahmad Bahreini, president of ABAB Inc., alleges that Midwest City and city employees have interfered with ownership of the Heritage Park Mall and Montgomery Wards building and efforts to renovate the properties. He argues the actions have violated his rights under the U.S. and State constitutions.

Bahreini filed a lawsuit in district court in February after city officials declared the property an “unsafe building” and requested that utility services be terminated from the property. The Edmond man asked for an injunction to restore utility service, a restraining order against city employees to prevent them from terminating utility service in the future, as well as financial damages.

The lawsuit was later moved to federal court, and utility service was restored. 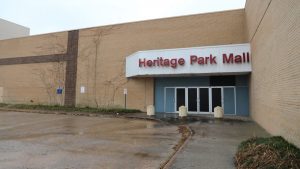 A federal judge partially dismissed a lawsuit filed by the owner of the Heritage Park Mall against the City of Midwest City. (Photo by Jeff Harrison)

Midwest City, in its motion for partial judgement, argued that claims for relief are invalid because Bahreini’s lawsuit did not comply with the Oklahoma Governmental Tort Claims Act. Heaton agreed with the city’s claim, but said Bahreini could still seek injunctive relief.

Heaton also granted the requests of the employees to be removed from the lawsuit. In the order, Heaton said the city is already a party in the case and employees acting in “official” capacity is redundant.

The judge also said the employees who are acting under the scope of their employment are also covered by the Oklahoma Governmental Tort Claims Act. The lawsuit alleges that only Poole acted outside of the scope of her employment. Therefore, Heaton dismissed state law claims against all others except Poole.

Bahreini’s lawsuit was sparked by the city’s decision to declare it an “unsafe building” and order that utilities be terminated. Fire Marshal Duane Helmberger issued the declaration after observing multiple building and fire code violations during a Jan. 14 inspection of the property.

“Due to potential risk of life and health of any occupants of this facility all utility services have been requested to be terminated immediately,” Helmberger said in a Jan. 17 letter notifying the owner of violations. “Continued illegal occupancy and use of this facility will result in continued monthly citations.”

Midwest City has cited Bahreini for many of the same issues dating back to 2017.

In the lawsuit, Bahreini’s attorney Danny Shadid says city officials have launched an “unlawful campaign” against him as owner of the Heritage Park Mall and Montgomery Wards building. He said he has invested his own money to renovate the property, all while it has been closed to the public.

“They issued said citations in bad faith with the intent to target and harass the plaintiffs, and with the further intent to obstruct the plaintiffs from performing renovations on the real properties,” the lawsuit alleges.

According to the lawsuit, in 2017, Bahreini submitted at least three formal applications for a building permit but was denied. He also alleges that city officials provided inconsistent information about obtaining a certificate of occupancy for a portion of the mall. Bahreini said he was told that he could acquire a certificate of occupancy for the common area of the mall, but was later told he needed a permit for the entire mall, which contained 88 rental spaces, according to the lawsuit.

In January 2019, the lawsuit states that Poole unlawfully tried to obtain a search warrant from the Midwest City Municipal Court to allow building inspectors and law enforcement officers to conduct a search of the property. Shadid said Midwest City is not a court of record and does not have authority to grant a search warrant.

The lawsuit said Brakefield and Poole continued to “harass” Bahreini with “tempted inspections” while the mall and store properties were closed to the public and while he was attempting to repair and renovate the facility.

On Jan. 14, Bahreini said city officials inspected the property. Three days later, Poole and/or Brakefield informed him that the city was planning to declare an emergency for unsafe conditions and cut off all utilities.

“The falsity and maliciousness of the defendants’ actions are borne out by the fact that the defendants have never declared the real properties to be unsafe during the past years of renovations when the properties were in a worse condition, prior to the most recent renovations,” Shadid wrote in the petition.

The lawsuit alleges that actions by the city officials violated Bahreini’s civil rights, claiming that Bahreini has been “deprived of property without due process” and “without just compensation.”

The lawsuit is one of two pending between Bahreini and Midwest City over the mall property. Bahreini was found guilty of several code violations by a municipal court judge. He appealed the ruling in Oklahoma County District Court in November 2018. A pretrial conference was originally set for May but was rescheduled for Sept. 24.

Bahreini has not received any citations since January. He is scheduled to be tried in municipal court for those violations later this month.