A man was shot and killed this afternoon at a local apartment complex, Midwest City Police Chief Brandon Clabes said.

Officers responded to Midwest Territory Apartments, 1505 N. Midwest Boulevard around 2:40 p.m. on possible shots heard. When they arrived, they found a black male lying on the ground suffering from a gunshot wound. 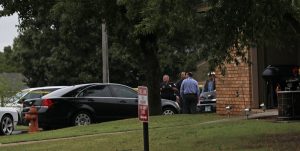 The victim was transported to OU Medical Center and pronounced dead a short time later.  His information is not being released at this time pending notification of next of kin.

Witnesses at the scene stated they heard shots and saw two black males running.  One fell to the ground the other fled the apartment complex in what is described as a four-door vehicle.

“We are asking the public for assistance.  If you have any information concerning this homicide, please contact our agency at 739-1306 or 739-1388,” Clabes said.

Detectives are on the scene and the investigation is ongoing.