Midwest City construction permits cooled off in August after totaling more than $10 million in the previous two months combined. 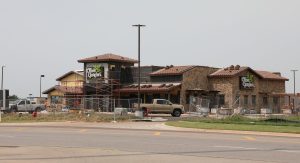 Midwest City did not issue any new industrial or commercial building permits in August. Two permits were approved for repair/remodel/add-on. Phamily Properties received a permit, valued at $15,000, to divide a building at 2113 S. Air Depot Blvd. Real Property Construction received a remodel permit, valued at $8,000, for 9045 Harmony Dr.

Thirteen roofing permits, valued at $143,800, were also issued in August.

In July, Midwest City issued a total of $4.46 million in construction permits. That included 16 single-family home permits. The largest permits, valued at $298,000 each, for two homes in the 12600 block of Forest Terrace. Both are being built by Bob Jones Homes.

Midwest City was even busier in June with $6.45 million in permits issued.

That included 15 single-family housing permits valued at more than $2.36 million. The largest permit, valued at $450,000, was for a home in the 800 block of Helm Drive that is being built by Avalon Custom Homes.

The city issued two permits for new industrial and commercial construction in June. They included a shell building for the Center Market Place, 5902 SE 15th St. which is valued at $1.7 million and the Scooter’s Coffee, 1865 S. Douglas Blvd., valued at $840,000. Scooter’s Coffee recently opened. And construction is underway on the Center Market Place.