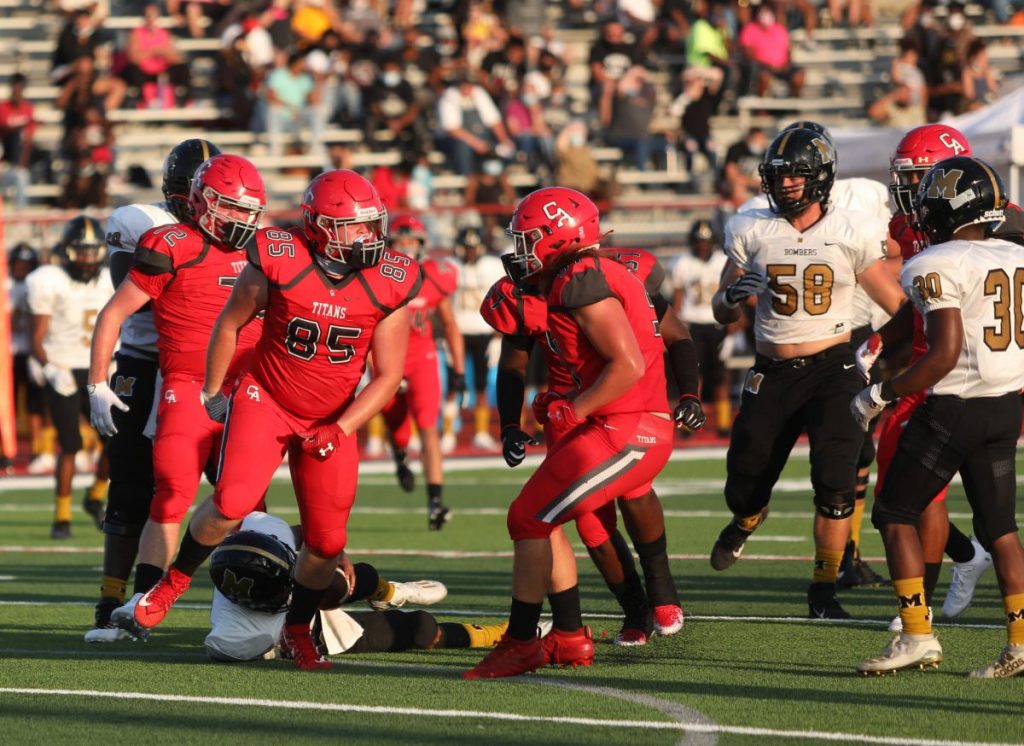 The Carl Albert Titans were not a happy bunch as they trekked into the locker room at halftime of their season opener in Gary Rose Stadium against neighboring Midwest City Friday night.

Mason Still and his defensive buddies were upset that the explosive Bombers had put three touchdowns on the board including one with just 25 seconds left on the clock.

Ben Harris, Javion Hunt and Co. were even less pleased that they had found the end zone only twice as MWC posted a 20-14 advantage halfway through the first COVID-19 influenced contest of the season.

The 2021 seniors have never lost to Midwest City and apparently they decided at halftime to continue that tradition.

So, what happened in the locker room at halftime?

“Nothing different,” said CA’s prize senior quarterback Ben Harris. “No panic, no screaming, no yelling, just attention to detail from the coaches. Needless to say, we were ready for the second half,” said Harris, who not only has never lost to Midwest City but has only lost one game in his stellar 3+ years at the Titan helm.

The Bombers took the second half kickoff and after a quick first down, Ezra Gustafson dredged up memories of the dual-oskie performance in the 2019 State Championship game, slapping down a DeAngelo Irvin Jr. pass, then Still and Caleb Zangari combined to drop Smiley for a four-yard loss, then Kentrell Bizzell (you’ll hear that name in an offense setting later) and Nathan Mooney sacked Irvin forcing the first punt of the contest.

From the 30, Harris launched a typical Titan Drive with a 12 yard pass to Damorrion Brown, then Noah Dobson, Dax Swanner, Wisdom Combs, Nathan Mooney, Corey O’Hagan and Mr. Zangari escaped the dancing Bomber forward wall and plowed a path for Hunt on five straight plays to reach the 26. 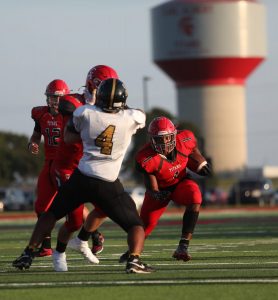 Then while Hunt took a breather, Bizzell came in and danced through and around the dancers to trot into the end zone and when the Swanner to Houston Russell to Jacob Eddy connection clicked, the Titans were suddenly ahead, 21-20, never to trail again.

But that all changed in the twinkling of an eye. Following a questionable facemask penalty that advanced the ball to the 41, Dondi King stepped in front of an Irvin pass and zoomed into the end zone, ignited celebrations on the field, on the sidelines, in the stands and even in the press box after the Swanner-Russell-Eddy trio made it 28-20.

Another Zangari sack, a Mooney-Bizzell sandwich to Friday and another Bizzell explosion forced a punt on the ensuing possession.

Harris displayed his Kyler Murray for 13, connected to the versatile Russell for 23 and another 13 to Gavin Haines for a first and goal from the three. Then Mike Corley pulled off his Lincoln Riley imitation as Hunt lined up in the Wildcat as usual, started left, pitched the ball to Harris going right and Ben lofted a TD pass to William Batts, who was standing wide open in the end zone and the visitors stands started to vacate.

Following the lone MCHS tally of the second half, Harris led his troops to the 28 and Corley/Riley responded by sending Bizzell onto the field. The 6-0, 205 pound junior then proceeded to carry the ball on 8 straight snaps including convoy-like gains of 20 and 23 yards to reach the end zone from the two with 41 seconds left on the clock.

Corley said many of his young players showed some nerves early in the game but put it together in the final half.

“We have some veterans guys but we’re a young team in places and this was the first time in the first for some of them,” Corley said. “I think they were kind of big eyed in the firs half, especially in the secondary. At halftime we told them to relax, get lined up and play football.”

Hunt scored the game’s first TD on the Titans’ opening drive which started at the 40 after a 25-yard kickoff return by Cobe Crews.

The two-headed I-Back, Hunt and Bizzell, lived up to expectations and then some as Hunt picked up 140 yards in 21 carries and Bizzell added 129 more in 13 carries.

“We have an experienced up front and me and Kentrell [Bizzell] are both 1,000 rushers last year so we don’t expect anything different,” Hunt said about the team’s running game.

Harris had a 35-yard gainer called back and still added 55 yards rushing while completing 12 passes for 138 more yards.

The Titans will be looking to claim their fourth Mid-Del championship in a row Friday night when they visit 6A-II’s No.2 ranked Del City Eagles, who lost a tense 15-13 contest Friday to Tulsa Washington.