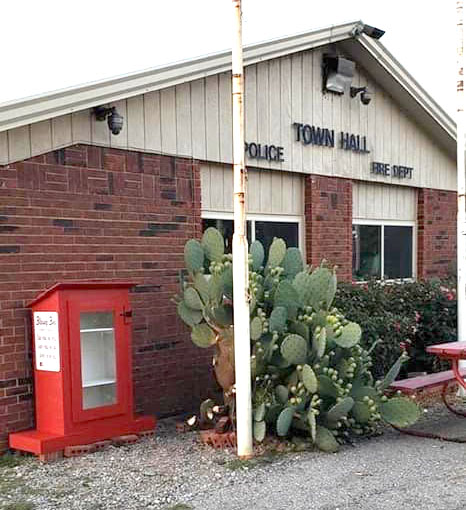 A Facebook post by the organization thanks Renae McGregor for sponsoring this box located at City Hall, located at 101 Elm Ave in Union City.

“This is your community blessing box!” The post reads. “Let’s help them STOCK this BOX! We pray blessings over this box!! Thank you Grady Hollars for building our Little Red Box!!”

Union City police chief Richard Stephens said of the blessings box, “I’m very excited about it, it will be a great thing for some families in our community. Just like the name says, a Blessing.”

A spokesperson for Oklahoma blessing boxes, Rose Massey went a little further in detail about Oklahoma Blessing Boxes, and why the organization shows Union City.

“We like to put them in rural communities,” Massey said. “We’d like to put them at city halls, churches, businesses. We don’t do personal homes. We were approached by Renae, and asked about them because she saw them on Facebook. We started the nonprofit several months back. Since then, we’ve put probably close to 30 boxes throughout Oklahoma.

I had originally started my box here in Marlow, Oklahoma. That was one of the first ones we did.

It did so well, I thought, ‘Well, we need to try to spread these out and get people to sponsor and host them and put them throughout Oklahoma.’

“We have a real need, you know, with all the increased unemployment with COVID-19. There’s so many people that have lost their jobs or can’t work because the businesses are closing. I mean, it was just one hardship after another that we kept hearing about. And so we got the idea to kind of spread them around. Spread the love, right?”

Senator Darrell Weaver and his wife Kim partnered with Massey in this venture four months ago, when it became a nonprofit. Massey had already been volunteering in this way for four years.

There are Oklahoma Blessing Boxes in Walters, Temple, Lawton, Pauls Valley and many more places.