With an event at the Mustang Bronco Bowl, the Thursday Night Cruisers raised money for the personal use of Mustang’s firefighters. 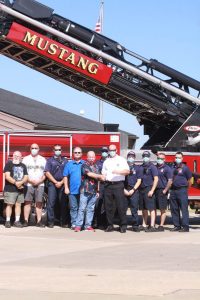 Shawn Russell, Vice President of the Thursday Night Cruisers, said Thursday, “This money is going to be used in case one of them gets sick and they don’t have sick leave, or an emergency fund for electricity, that kind of thing. They’ll have this cash readily available. We had a car show last Saturday, and that’s how we raised the money. All those funds are going to be donated to the Mustang firefighters. This was the first one we’ve done. We did one for the police department about 6 weeks ago. We’re going to talk about this being an annual deal. Since we did one for the police that were in need, so we thought “why not do one for the fire department?” We I talked to the president and we decided to do it. We knew they had personal needs too. COVID-19 played into that, but at the same time, it’s a fund they could’ve used at any time.”

Craig Carruth, Mustang Fire Chief, said it was amazing and the firefighters appreciate it.

“I can’t tell you how much we appreciate it,” Chief Carruth said. “What they’ve done for us is going to be a great thing for our association. We have this money set up. This is going to go toward our benevolent account. That’s going to be able to assist the firefighters with different things like surgeries, families, if they get sick for an extended period of time, we can use this money to help them through those times. Any type of health issue or mental issue that they need to see a doctor for, this will assist it.”

President of the Thursday Night Cruisers, Jeff Kelley said he felt like some people overlook the service of local firefighters and wanted to make sure the Cruisers organization did something for both.