Trump Trains are picking up steam and rolling all across Oklahoma. 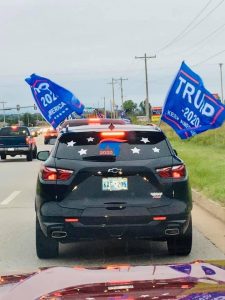 A Trump Train is a large parade of vehicles waving, honking horns and flying flags in support of President Donald J. Trump.

The events are organized by members of the Facebook group #Drivefor45 Oklahoma.

The town of Tuttle is set to have their first drive at 6:30 p.m. on Thursday September 17.

“We started being a part of a Facebook page called drive for 45 Oklahoma. They’re having Trump drives all over the state. We decided we would have one in Tuttle,” said Tuttle Organizer Kristin Willis.

The Tuttle drive will meet at Williams Foods and start out with a prayer. The parade will go through Tuttle and other towns to show support for President Trump and law enforcement.

The group is expecting a very big turnout of Trump Supporters for the first Trump parade in Tuttle.

“I think it’s going to be pretty big. We’ve had a lot of interest. People are coming with Trump flags, American flags and Back the Blue flags. Pretty much everybody has flags. One of my friends is going to bring a cut out of Trump and we’re going to take pictures before we leave. We’re just excited. It will be fun and everyone is welcome,” said Willis.

#Drivefor45 Oklahoma is the Facebook group you can join for info on all the Trump parades.

“We have people ask us who we are and how we get involved. We push everybody towards the Facebook page. The Facebook page lists the events and we keep everyone updated with what we’re doing,” said #Drivefor45 Oklahoma Founding Member Jerry Adams.

“This is simply to drum up support for 45-for the President,” he said.

The group does a weekday drive and a Saturday drive in Mustang and Yukon.

“We do a group in Yukon and a group in Mustang. We will drive for about an hour and call it a night. We just kind of get out there and make ourselves be seen,” said Adams.

The Mustang group meets Thursday night around 6:30 p.m. at the Cash Saver and Yukon meets around 6 p.m. at the old movie theater.

“We honk our horns. We’re waving just like any other parade. Cops love it. We get great reaction from the police and fire departments. I mean we get great reactions. Lot of times the cops will flash their lights, honk, beep or whatever at us. We show great love to all our first responders,” said Adams.

Trump supporters across the state are encouraged to join in on the nationwide drive coming up in October.

“October 3rd is our nationwide drive at the Capital at noon. We have people driving in all over the state for that. I’m lining up some speakers to fire up the crowd. That will be at the State Capital on the south side at noon,” he said.

The Trump parades are peaceful, patriotic and a way to be socially distanced while embracing Trump’s re-election campaign.

“Before every drive we do the Pledge of Allegiance and a quick prayer for our President. The parades get a lot of positive feedback from the communities. People wave, give thumbs up, honk and flash their lights. We just kind of call it our Trump Train,” said Adams.