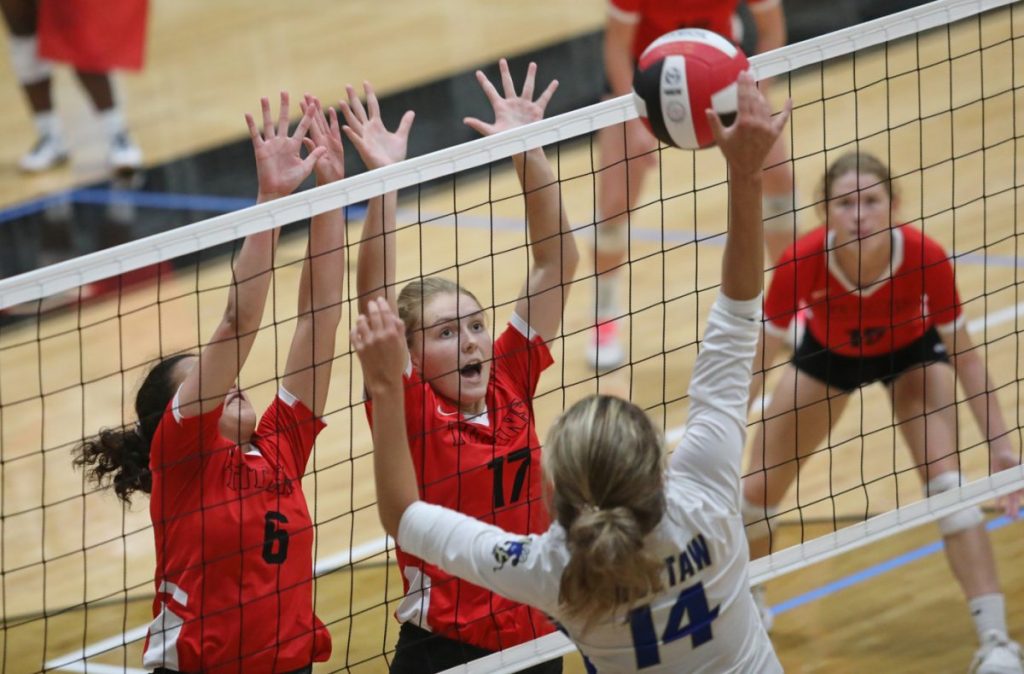 Carl Albert’s Willow Roe and Zella Heater try to block an attack from Choctaw’s Quyntana Bateson during the Mustang Tournament on Sept. 12. (Photo by Jeff Harrison)

The Carl Albert and Choctaw volleyball teams made the trip west last Saturday for the Mustang Tournament.

The Lady Yellowjackets finished second in the tournament with a 4-1 record in round robin play.

“We were up and down most of the tournament,” said Carl Albert coach Hadyn Robbins. “We had some really good moments though where I saw my girls use and do things we’ve been working on all season.”

Mustang breezed to the tournament title by winning all five matches in straight sets. Their toughest match was against Carl Albert. 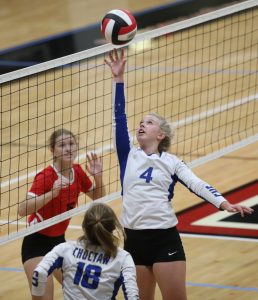 Choctaw’s Josie Thomas tips the ball over the net. (Photo by Jeff Harrison)

Choctaw and Carl Albert faced off in the final match of the tournament.

The Lady Yellowjackets dominated early with a 25-16 win in the opening set. Carl Albert answered with a 25-18 win in the second, forcing a third-set tiebreaker.

Things stayed tight in the third as the teams wrestled the lead back and forth. Neither team led by more than a couple points. Riley O’Dell put Carl Albert on top 10-9 with a kill. Choctaw regained the lead and got to match point at 14-12. Zella Heater answered with a kill helping even the score at 14 apiece.

Choctaw’s Jazmin Adams finally ended the match with back-to-back kills for the 16-14 win in the tiebreaker.

The Lady Titans also lost earlier in the week against the OKC Storm 3-0.

“The girls played pretty well, defense especially, but my front row couldn’t manage to put a ball down,” Robbins said.

Stuart had a team-high with 6 kills. Willow Roe led with 4 aces. Nina LaValley and Hunter led the defense with 13 and 11 digs, respectively.