A change did the Del City volleyball team good.

The Lady Eagles used some pregame substitutions and relentless effort last Thursday in a 3-0 win over Midwest City at John Smith Field House. 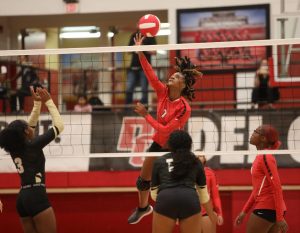 Del City’s Nevaeh Ramsey tries to spike the ball against Midwest City during a match on Sept. 10. (Photo by Jeff Harrison)

“We made some minor adjustments with our substitutions and finally connected as a team and it paid off,” said Ashley Hanne, Del City coach. “We hustled and tried the entire game.”

Junior Nathella Williamson played a key role in the win. She came up with several kills and blocks at the net. After the game, she said the win was a confidence boost for the team.

“I expected a lot from our team. I think we’re really good, but we just get into our heads sometimes,” Williamson said.

Midwest City led early in the first set before seeing Del City charge ahead late. Daisy Leos got her team to match point at 24-22 with a kill. They took the next point and the set 25-22 when a Midwest City kill attempt landed out of bounds.

The teams kept things tight for much of the second set. Midwest City pulled ahead 15-13 on an ace by Jade Singleton. But things quickly went south for the Lady Bombers. Del City reeled off 11 straight points. Laura Sparks, Nevaeh Ramsey, Olivia Sparks and Nathella Williamson each had a kill in the run.

Del City finished off the set 25-17 due to a service error by Midwest City.

The Lady Bombers pressured Del City in the third set but couldn’t come up with a win. They pulled within a pair late at 22-20. But the home team got a key block and scores from Ramsey for the decisive 25-21 win.

Midwest City was home Tuesday against Lawton and will travel to Putnam City on Thursday. Del City will host Lawton on Thursday.