The No. 6 Lady Broncos continued their impressive play this week and extended their winning streak to seven matches, and even knocked off the No. 1 team in the state, Edmond Santa Fe 3 games to one. To top it off, the Lady Broncos went 5-0 to win the Mustang Varsity Tournament, which was held on Friday and Saturday at the events center. The Lady Broncos’ record stands at 21-3 on the season. 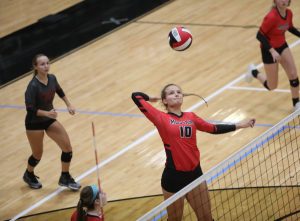 Mustang’s Ruby Kelley prepares for a spike against Enid on Saturday. (Photo by Jeff Harrison)

Mustang came out firing on all cylinders in the first game vs Santa Fe, dominating the Wolves in a 25-14 win. Santa Fe rebounded for a 25-17 win in the second game, but the Lady Broncos scored six out of the last eight points to win the third game 25-19. The fourth and final game was close, but Mustang came away with the set and match by a score of 25-24.

Kelly was thrilled with the win.

“It’s amazing. All of our hard work is really paying off. We’re trying to stay aggressive,” she said.

Fehrle, Cassidy McKinney and Kelly were named to the all-tournament team.

In compiling their sparkling 21-3 record, the Lady Broncos have only lost a grand total of 10 games. Their games won and lost record for the season is an eye-popping 49-10.

The Lady Broncos will be back in action on Thursday when they host Edmond North at the Mustang Events Center.