Mayor Matt Dukes thanks Grace Sullivan for her years of service as a volunteer during a city council meeting on Sept. 8. (Photo by Jeff Harrison)

Grace Sullivan retires after 22 year on Midwest City Tree Board

Grace Sullivan recently retired from the Midwest City Tree Board, which she has served as a member for 22 years, as well as all other city committees.

Sullivan has been an active volunteer with numerous city committees and boards for several years. She also previously served as the Neighborhood Watch president for the Oakwood East neighborhood. 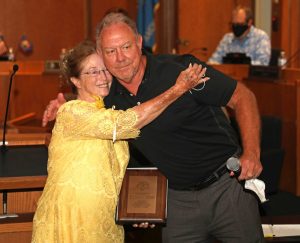 “I can’t thank you enough for all that you’ve done for this city and in your community,” said Dukes, who recalled first meeting Sullivan while he was a police officer. “I wish we could clone you because we need more like you.”

Paul Streets, public works director, said he enjoyed getting to know Sullivan while working together on the Midwest City Tree Board. He presented her with a plaque in honor of her service.

“You’ve been an incredible example not only to citizens of Midwest City but to the employees, to see that there are dedicated people that live here and are invested in the community,” he said.

“If you look around the city and see some of the beautifully landscaped islands, parks and trails, this lady was a part of that,” he said. “She had a lot of vision on the Tree Board.”

Grace briefly spoke at the meeting and thanked city leaders for the recognition.

“I appreciate all the kind words and the plaque,” she said. “And like Vaughn said, we did a lot of interesting things and learned a lot.”