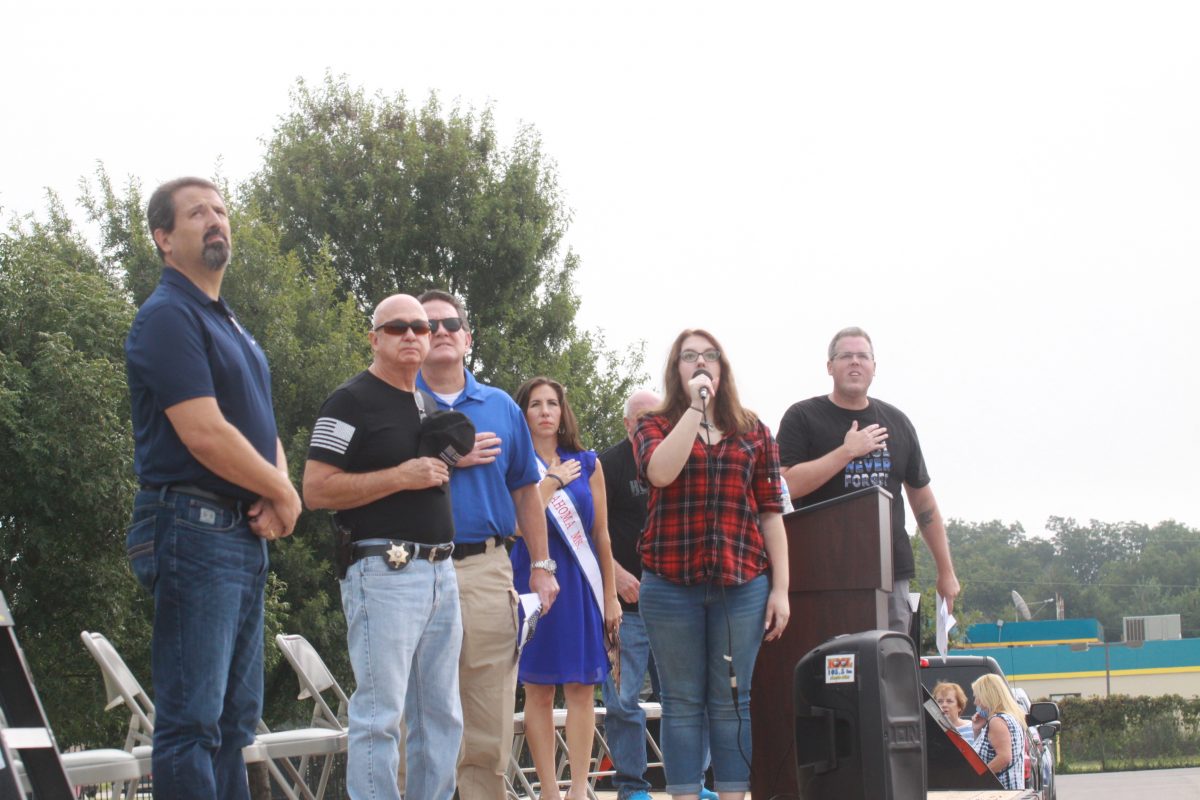 Hundreds of people gathered Saturday morning at Grady County Fairgrounds for a Back The Blue Walk that was two miles long. The event began with musical numbers from The Sister Duo, speeches from local law enforcement, and speeches made by prominent supporters.

Grady County Deputy Shayne Melton was a lead coordinator for the event, and spoke about the horrors of serving the thin blue line.

Melton said, “I’ve responded to and investigated fatality collisions, domestic violence cases, arsons, child abuse cases, rapes, kidnappings, robberies, attempted murders, drive-bys, child murders, adult murders, and suicides, with each and every one of the victims burnt into my mind for good. I have worked 48 hours straight without sleep, I have held cold, lifeless bodies. I have held victims’ hands, telling them that they’re going to be okay, only to hear their last breath moments later. I’ve almost been trapped in burning homes, shot at, come at with knives and sticks, hit in the head, punched in the face, kneed in the groin, and spent hours upon hours struggling to talk people into not taking their own lives. I have missed anniversaries, birthdays, date nights, kids’ first days of 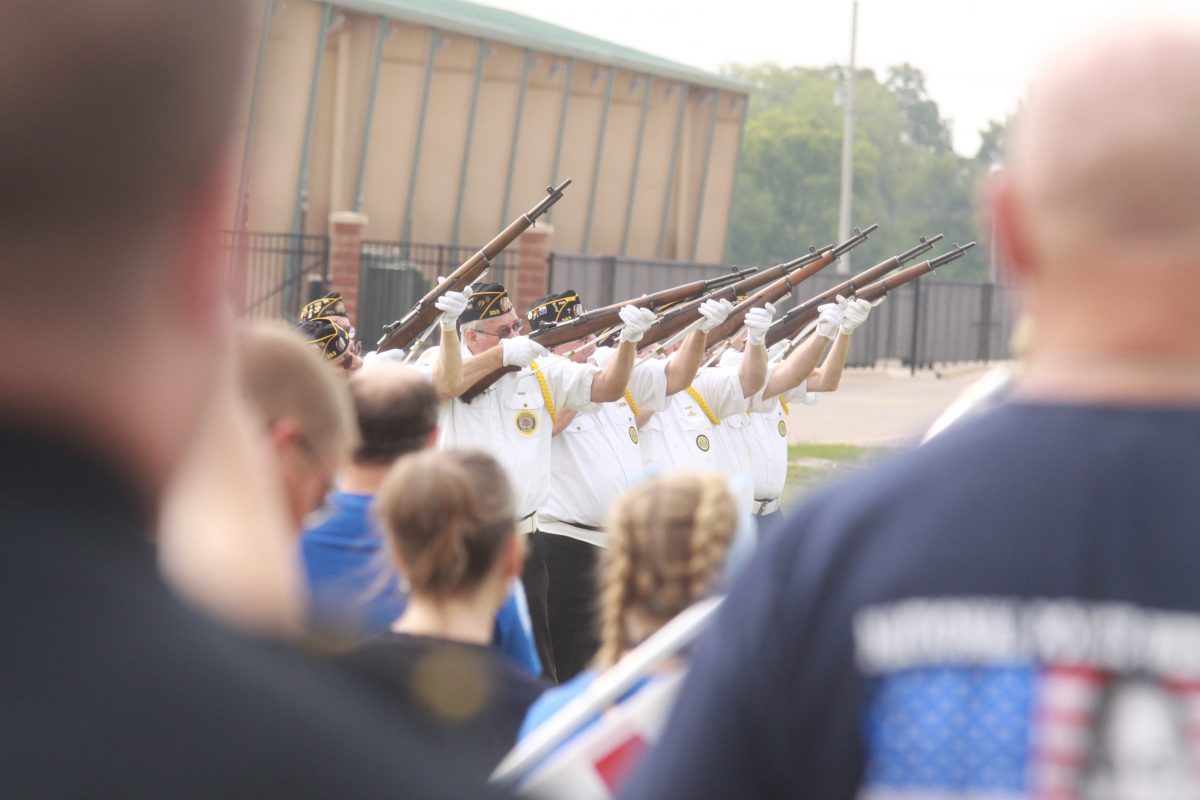 school, kids’ soccer games, first words, first steps, all to come home covered in someone else’s blood, asking my wife if she’ll wash my clothes as I strip in the garage while telling my wife ‘This was a bad one.’ I am not a man without sin, but I am a man who rises from his failures versus not taking responsibility for his actions.”

Grady County DA Jason Hicks spoke about current events and conditions that make it difficult for police officers, and implored citizens to say thank you to police when they have a chance. 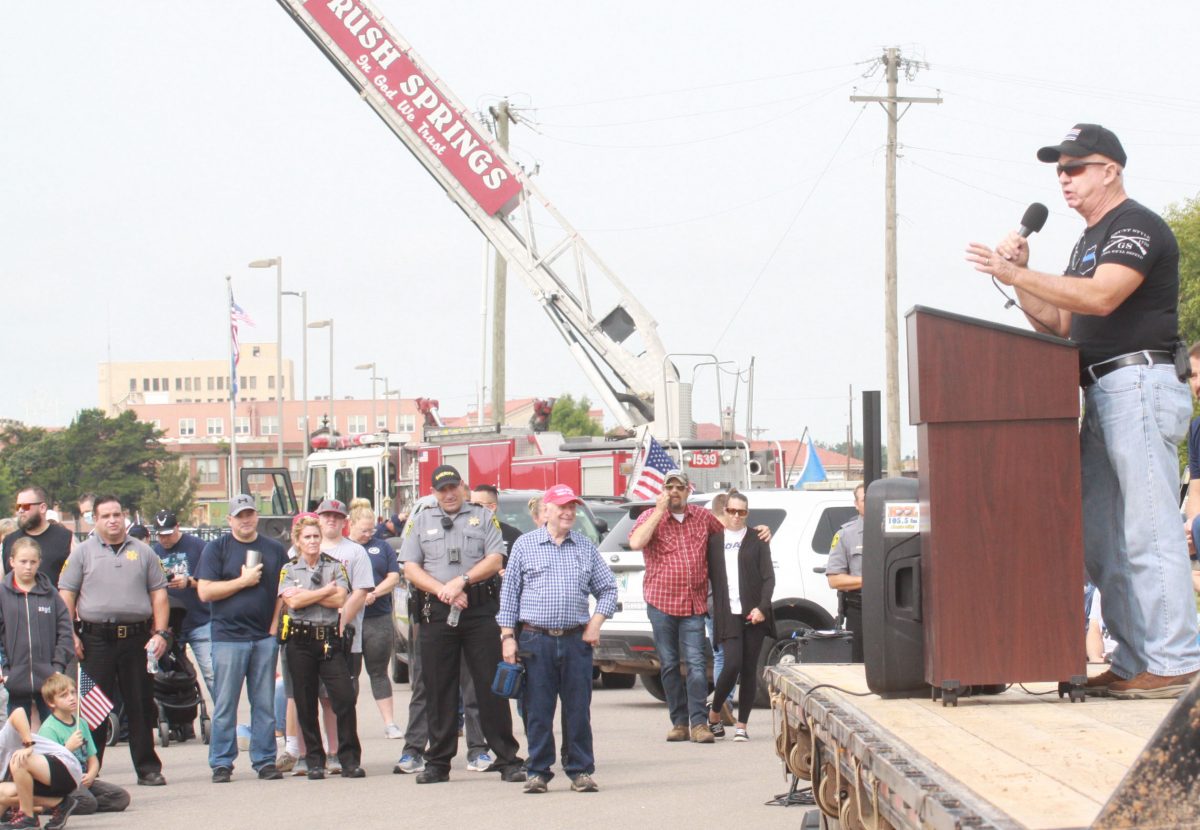 “If you’re going to get rid of our police, and you want to defund them,” Hicks said, “you’re going to get the same thing from Oregon and several other states where people won’t stand up and support their law enforcement. I don’t want to see that here and no one else does either. I’m going to encourage you to, every time you see an officer, stop and thank them. I was talking to an officer a few weeks ago and he told me he’s been an officer for 20 years and not one time has a community member stopped and said, ‘Thank you for your service’. I thought that was a shame. A law enforcement officer deserves better than that. They talk about defunding the police. That can happen here in Oklahoma, like many other states. They’re taking tools out of our tool belt right now.” 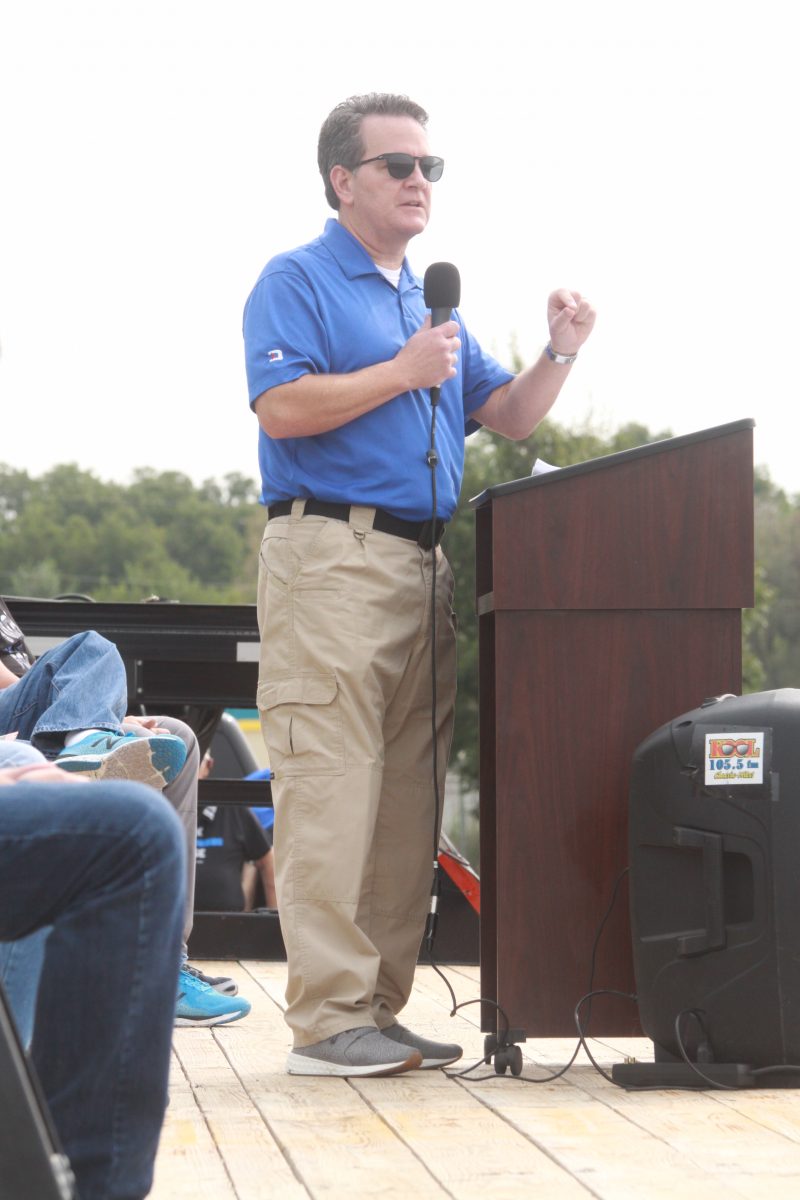 Grady County Sheriff Jim Weir, recently elected for his third term, also spoke at the event, saying, “I have been in law enforcement since I was 19 years old. Police are their worst critics. If they make a mistake, they will beat themselves up for it. They don’t have to hear the public do it, they’ll do it themselves. That’s why I’m a little lenient when it comes to discipline because we’re all human and we all make mistakes. Back when I was on the bomb squad on the military, I found this quote from Theodore Roosevelt and I’ve shared it with as many people I can: ‘It’s not the critic who counts. The credit belongs to the man who is actually in the arena, who’s face is marred in dust, sweat, and blood, who strides valiantly, who, at worst, if he fails, at least he failed while daring greatly so that his place shall never be with those cold souls who know neither victory or defeat.’ Remember that.” 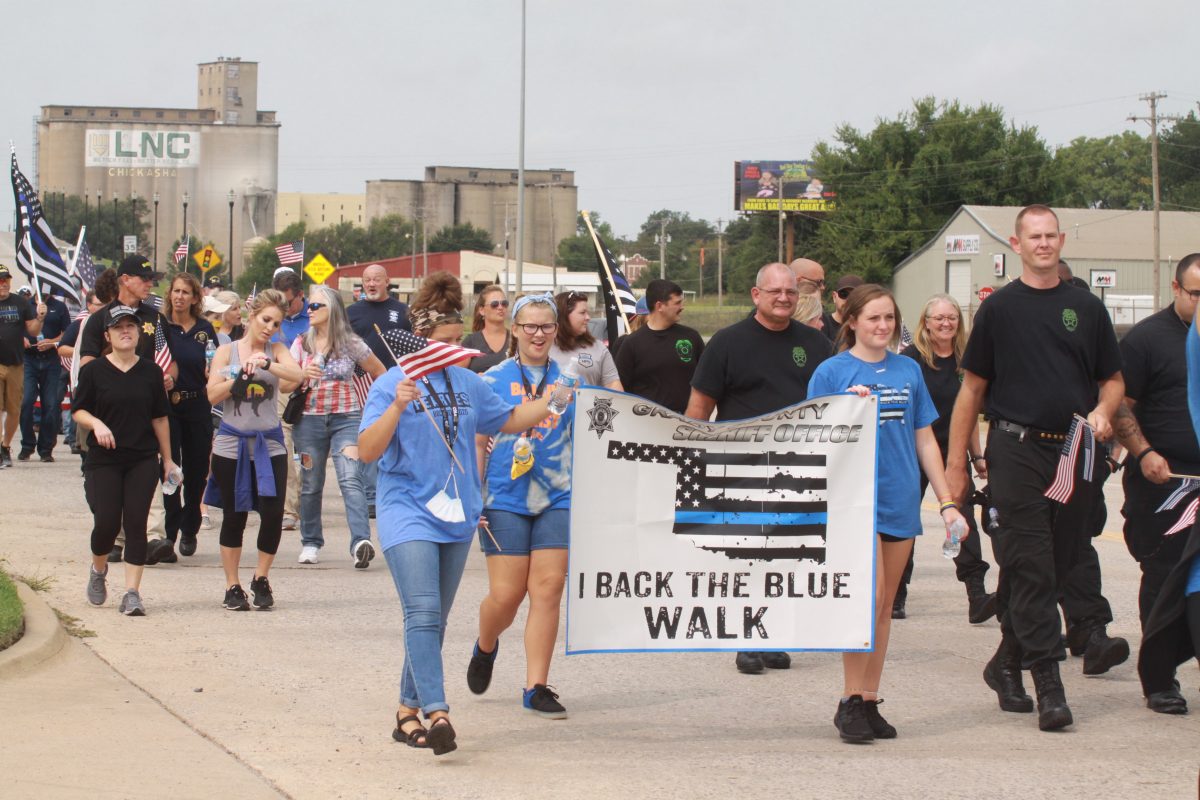 “From the moment we are born, we each posses a special skill or ability,” Butler said. “Those gifts come with a purpose, to use them. Either in the form of our hobbies, or our careers. For the men and women that we honor today, their passion translates into complete selflessness as they have chosen to use their gifts to protect and serve their community. I’d like to address all of the men and women in law enforcement directly. Each day you choose to put on your uniform, you choose to sacrificially love the people around you by protecting us when possible, disciplining us when necessary, and honoring us no matter the circumstances. We believe we are all human beings, entitled to the 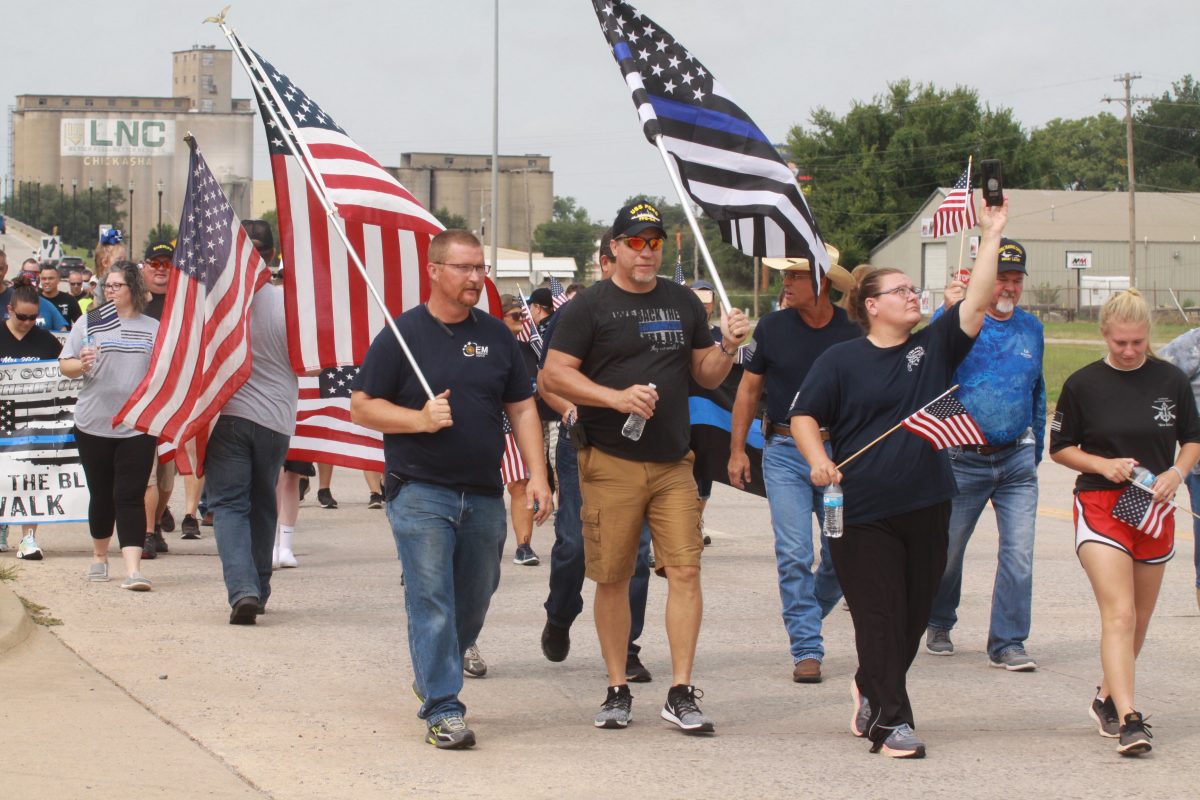 God given rights of life and liberty. You fulfill the duty of protecting those rights. I believe it is because of you that we do not have to live in fear.”

GCSO Sergeant Phillip McCarthey said he appreciates the event, and hopes it isn’t the last Back the Blue Walk.

“I was really excited with the show of support and great turnout that we had. I hope it turns into an annual event and continues to grow.”

For more information about the 2020 Back the Blue Walk, held in Chickasha, find the event on Facebook. 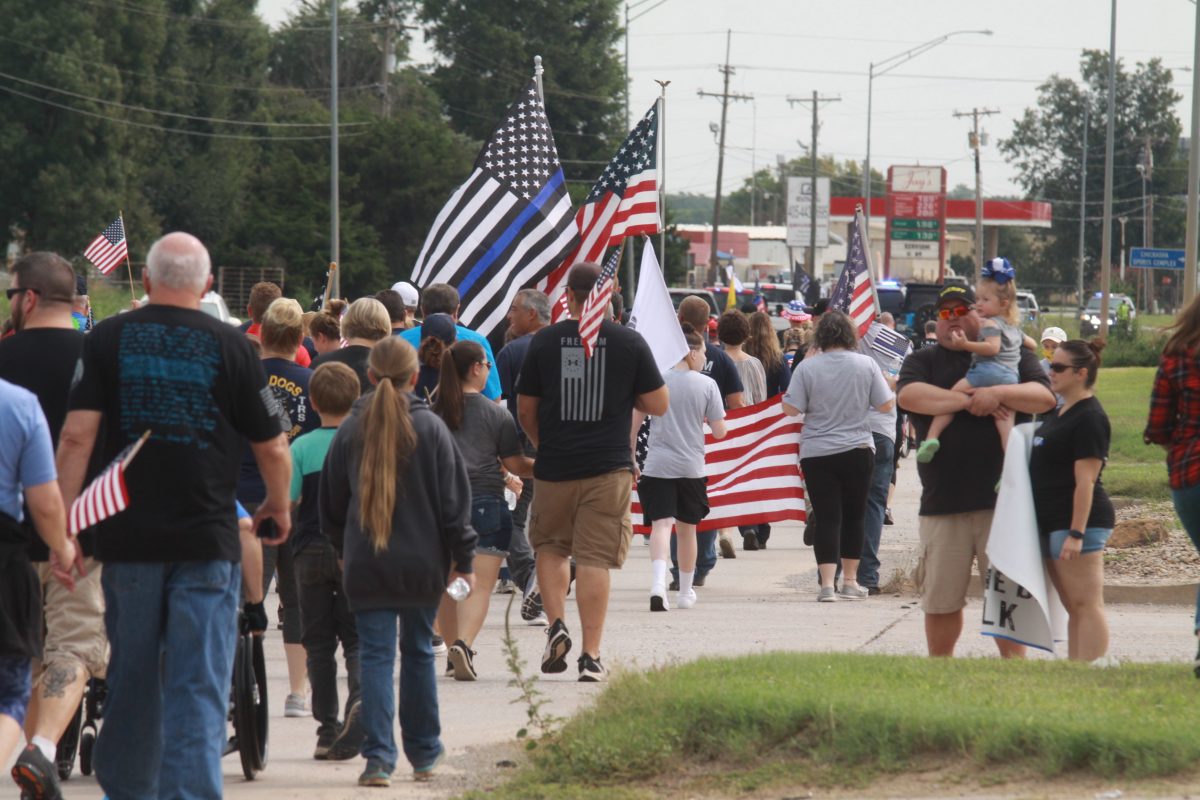