Another major road project is underway in Del City. 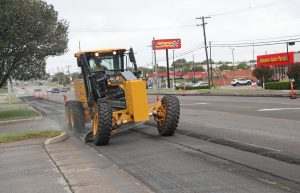 The city is repaving SE 29th Street between Sunnylane and Sooner roads, and upgrading traffic signal lights. Work started this week and is expected to last about a month, said Mayor Floyd Eason.

“We’ve been working on this project for about a year. It’s unfortunate that it happened right when the I-40 bridge projects started, but it will be really nice when it’s all done,” Eason said.

ered with Oklahoma County District 1 for the road project. County road crews will mill the top layer of the existing roadway and overlay the street with asphalt. They will also repair any damage to the road base.

“This project is being done by county employees and county equipment,” Eason said. “The city is buying the materials and paying the county their rate for the work. The project came in less than we budgeted which is good news.”

Crews will mark the roadway using thermal striping rather than traditional paint. Action Safety Supply Co., LLC was awarded the contract for $29,281.25.

“The thermal striping is very bright at night and lasts a lot longer than paint,” Eason said.

The road project is one of several on the horizon in Del City. The city is currently seeking bids for another project along Sunnylane Rd. between SE 29th and SE 44th streets. It includes repairing the approaches from residential streets onto the main thoroughfares.

“We’re planning to spend close to $3 million on street projects which is a big budget for a town our size,” Eason said.