The No.6-ranked Choctaw Yellowjackets blocked two consecutive punts in the fourth quarter, and then reclaimed the lead with a 5-yard touchdown pass from sophomore quarterback Steele Wasel to Terrill Davis to shock No. 3 Booker T. Washington, 26-22. 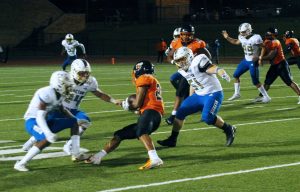 The Friday night slobberknocker opened District 6A-II-2 action at S.E. Williams Stadium, and was historic as the Jackets claimed the school’s first win over the hosting Hornets.

Choctaw answered with a 3-yard run by La’Trell Ray with 2:29 left in the first. A two-point play failed, and Choctaw trailed 7-6.

The Jackets were able to take a 12-7 lead by halftime with a 24-yard pass from Wasel to Ray with 2:55 remaining in the second quarter.

Choctaw’s defense had been playing lights out all year, and they looked even more refined at BTW.

Choctaw’s second blocked punt in the fourth quarter was at the hands of DeSean Brown, who recovered the ball in the end zone to put CHS up, 19-14.

Choctaw head coach Jake Corbin says a play came to him in a dream Wednesday, and Friday night Choctaw brought it to life setting up a comeback win over Booker T. Washington.

The Hornets were dismayed when the big man, Cade McConnell, moved out to a receiver position for a tackle-eligible play on fourth and 11.

The play resulted in a bomb down the middle from Wasel to R.J. Jackson for the first down. Another pass to Jackson completed a 31-yard advance to the 5-yard-line leaving Hornet defenders stunned. Davis, who had been out so far this year to prevent the spread of COVID-19, scored the game-winner on the next play with 2:11 remaining.

“The play that set up the touchdown, it sounds like I’m making this up but I swear this is true, it came to me in a dream Wednesday night,” Corbin said. “We didn’t have time to practice it. We’ve never ran that play before. I told them about it in the huddle right before that drive.”

“It brought tears to my eyes,” said Corbin. “It was unbelievable. God is so good.”

The win was historic as Choctaw’s first victory over Booker T. Washington. The series record is now 1-4, but more importantly the Jackets are now undefeated in district action and look to use that momentum as fierce district play continues.

“I told our kids we don’t have to beat them, but it’s really, really nice if we do. It wasn’t a win at all costs game, but it’s really nice we did,” said Corbin. “I’m so proud of our kids continuing to fight. We feel like we’re getting a little bit better each week, but we still have a long ways to go.”

Wasel rushed for 76 yards, while Ray added 53 including a TD.

Davis had nine yards rushing and Rone had two. 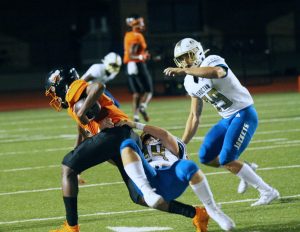 Ethan Rone (24) wrestles a Hornet ball carrier, while Donnie Wingate (89) looks to assist in a big play for Choctaw vs. BTW. (PHOTO BY RYAN HORTON)

“We have a much improved Ponca next week, and you can’t sleep on them,” said Corbin. “We just plan to go 1-0 every week, and hope to be 2-0 after Homecoming. We’re excited to be home, and have been logging too many miles down the interstate.”

Kickoff is set for 7 p.m. at Bill Jensen Field. 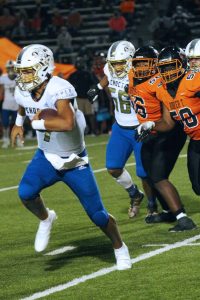