Lady Panthers move up in district

All systems were “go” for the Harrah Lady Panthers Tuesday as they beat the COVID-19 menace and picked up a 2-1 victory over Bethel on the Lady Wildcats on their home field to move into second place in the District 4A-4 standings.

Tori Miller had another dominant performance on the mound, hurling a no-hitter for her seven-inning stint and striking out 16 batter, just one shy of her record-tying 17 last week.

Miller has been on a late-season tear, winning six in a row since a tense 2-1 loss to Dale in the Dale Festival. During that streak, she has pitched four shutouts, allowed only two runs and struck out an average of 12 per contest. 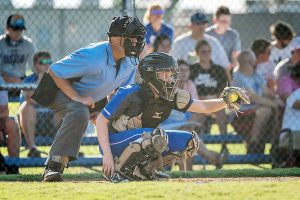 Harrah junior catcher Skyla McPhillips is one of the ringleaders of the Panthers’ surge into the upcoming Class 4A playoffs. (PHOTO BY JASON TURNER)

With a couple of starters in quarantine, senior Julia Waltman stepped up and drove in the first run, then junior Macey drove in Cheyanna Watson for the eventual game winner.

The Panthers followed that with a late surge to defeat Pauls Valley, 13-5, on Thursday on the PV home field.

The Lady Panthers jumped out to a 7-2 lead before Pauls Valley rallied to pull to within 7-5. But in the top of the seventh, the Harrah Ladies exploded for 6 runs sparked by the first career homerun for junior outfielder-pitcher Hunter Jonas.

The win was the 7th in a row for the Panthers going into the last week of the regular season with a 14-6 mark.

Tecumseh is undefeated in district play and has the No. 1 seed all locked up but the Lady Panthers could claim a home field advantage in the district playoffs by finishing in second place.

The wins over Bethel and Pauls Valley lifted the Lady Panthers to 7-3 in district play with only two district games remaining, a makeup game against winless McGuinness and a home tilt Monday against top-ranked Tecumseh.

Defending Class 4A State runnerup Purcell is currently in third place with a 6-4 record with makeup games against Pauls Valley and McGuinness remaining on their schedule, both winnable games.

So, the Panthers need to win-out to stay ahead of the Lady Dragons and grab the coveted home field advantage.

District play begins Oct. 8 and the Harrah Girls have warmup games scheduled against Jones on Sept. 28 and McLoud on Oct. 1.