The Jones Longhorns opened defense of their District 2A-2 championship with an easy 46-6 triumph over Star-Spencer Friday night at Tim Wallace Stadium, but the looming threat of the COVID-19 virus cast a cloud over the future of the district. 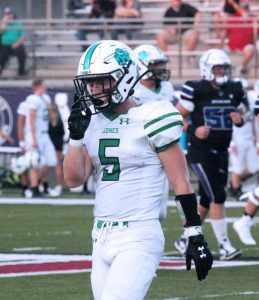 Treyton Dorrell takes the field in a recent game.
(PHOTO BY RYAN HORTON)

The Longhorns journey to Chandler Friday night to take on the 3-1 Lions who won their district opener in impressive fashion with a 36-0 whitewashing of Crossings Christian.

But Star-Spencer is a member of the Oklahoma City District which announced Monday that all athletic contests are terminated till further notice.

That also applied to Millwood, co-favorite to battle the Longhorns for the district title but hopefully, the Falcons will be back on the schedule in time for the Millwood-Jones showdown, scheduled for October 23.

Anyway, while Jones will play at Chandler and Meeker will travel to Prague, the Star-Spencer at Crossings and Kellyville at Millwood games will not be played.

Kellyville has been the surprise of the non-district play and opened district play with a whopping 60-26 triumph over a good Meeker team to go 4-0 for the season, one more game than the Ponies won all last year.

After a single TD in the opening quarter, junior gunslinger Carson May warmed up and led his squad to 3 touchdowns in both the second and third quarters. The Bobcats finally got into the end zone against Jones’ reserves in the fourth period.

May completed 17of 23 passes for 247 yards and touchdown passes to Trey Dorrell, Elijah Reed and Emmett Martin. Dorrell was the leading receiver with 5 catches for 55 yards and another TD.

Reed was the Offensive Player of the Game with 3 catches for 90 yards and added another 41 yards and a touchdown on the ground.

Player of the Game was Tj Thomson, who dominated the stat sheet with 10 tackles for loss, a fumble recovery and a sack plus his contributions to the offense and special teams. Braiden Martin was the Special Teams Player of the Game. 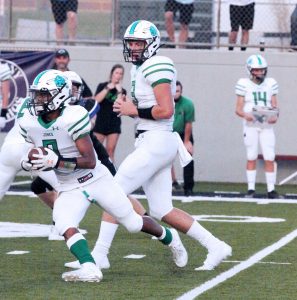 Jones QB Carson May hands off to Elijah Reed in a recent contest. (PHOTO BY RYAN HORTON)

Another two-way performer who is enjoying being back on the field is the Defensive Player of the Game Tye Tucker, who registered 9 tackles, including one for loss and a sack plus slapping down two pass attempts and a fumble recovery. Carter Cranford also had a pass interception.

Also sparking the defensive effort was big Max Wynn, who had a sack and William Irvin who had 10 tackles, including one for loss.