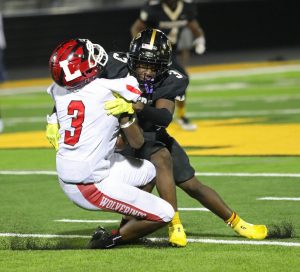 Brandon Wright delivers a big hit during a game against Lawton. (Photo by Jeff Harrison)

A resilient offense and dominant defense were a winning combination for Midwest City last Friday night.

The Bombers held Lawton scoreless in the second half and forced four turnovers in a 34-9 win in their home opener at the newly renovated Jim Darnell Stadium at Rose Field.

“They took the first drive and got three and after that it was hard sledding for the Wolverines,” said coach Darrell Hall. “And the offense was able to move the ball and get some passes off.”

Midwest City overcame some hiccups on offense with big plays from wideout Makale Smith. The Oklahoma State commit caught a pair of touchdowns, including a 55-yard bomb that capped the team’s scoring. Smith finished with 4 catches for 105 yards.

The Bombers defense kept the Wolverines (3-1) in check most of the night, allowing only 202 yards of offense. They had plenty of heroes led by Kristawn Friday, who again was a wrecking ball with 5 tackles, an interception return for a touchdown, a forced fumble, and a fumble recovery. LeJaylin Long-Jackson had 7 tackles and 3 sacks. Arthur Broiles had 6.5 tackles and an interception.

Lawton took the early 3-0 lead with a field goal on their opening possession.

Irvin got off to a rough start with an interception on his first pass of the game. The Bombers defense picked him up by forcing a three-and-out. The sophomore took advantage of the second chance and put the Bombers on the board with a 23-yard touchdown pass to Smith. Kaden Thompson split the uprights to make it a 7-3 score with 4:22 in the first.

The Bombers quickly got the ball back on an interception by Artez Young but saw the drive stall in the red zone. Friday made sure they didn’t come up empty again when he picked off a pass and returned it for a touchdown and a 14-3 lead with 10:07 in the second.

“He does a ton. He gets a turnover every game. I think he had two this game and scored on one and he’s running hard on offense,” Hall said.

Lawton answered with an 81-yard scoring drive. Christian Houston scored from three yards out with 5:45 in the second. A missed two-point conversion made it a 14-9 score.

The Wolverines later forced another takeaway when Esariuan Gillmore-Kelly picked off a deflected pass from Irvin. But the Bombers took it right back on an interception by Arthur Broiles, which set up the final score of the half. On fourth down, Irvin slipped through a pile of bodies for a 1-yard score with 15.8 seconds left in the half.

Things didn’t go the Bombers’ way early in the third. On the first drive, they had a touchdown called back by penalty and Irvin was later picked off.

Midwest City had another touchdown called back on their second possession. Irvin hit Dylan Sebock across the middle for an apparent 36-yard touchdown, but it was called back due to holding.

On the next play, Brian Wilson Jr. took the ball on a reverse and raced around the left end for a 48-yard score. Thompson’s kick made it a 27-9 score with 2:42 in the third.

“That felt awesome,” Wilson said. “I knew I would score. I had my quarterback and Dylan Sebock blocking and I took it for the TD.”

The Bombers added to their lead with one more score in the fourth. Irvin faked a handoff and fired the ball downfield for a 55-yard score to Smith with 11:51 remaining.

Midwest City held the Wolverines off the board the rest of the way for the 34-9 win.

The Bombers next game against U.S. Grant on Thursday has been canceled due to COVID-19 concerns with the Oklahoma City School District.

Midwest City will be back at home Oct. 9 against Del City. The school will hold a ribbon cutting and grand opening ceremony for the renovated Jim Darnell Stadium at Rose Field.