Face coverings will still be required in public in Midwest City.

The city council last week extended an existing public mask mandate until Oct. 27. The order requires face coverings to be worn in places that are open to the public when it is not possible to maintain 6 feet of social distancing.

Midwest City issued the mask mandate on July 27. It was scheduled to run through Sept. 22 when it could be reconsidered by the city council.

The council unanimously agreed to continue the mask order until Oct. 27 due to infection levels in Midwest City and the metro area and recommendations from health officials. The mandate will also automatically expire if the test positivity rates in Oklahoma County are 5% or less for two consecutive weeks. 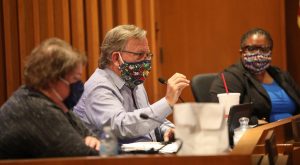 Phil Maytubby, chief operating officer for Oklahoma City-County Health Department, gave a brief presentation on COVID-19 levels in the metro. He said the state continues to see elevated levels of the virus, especially at schools, colleges, and correctional facilities. The cases have also spiked following holidays and are impacting younger people in the 18-35 age group.

“At first almost all of the deaths were long-term care related and now they are not because we have more virus circulating in the population and people are becoming inadvertently exposed,” he said. “A lot of people are asymptomatic.”

The Oklahoma City metro has seen fewer cases than Tulsa which Maytubby said is due to mask mandates in the suburban areas.

“Our average daily in the state is over 1,000 so we need everything we can get to try and slow this down,” Maytubby said.

“If you’re at 5% positivity, your case loads will be down, your hospitalizations are going to be manageable and everything will be where it’s supposed to be,” Maytubby said.

The positivity rate is the percentage of tests that have a positive result for COVID-19 per 100,000 residents.

Councilmember Pat Byrne agreed with extending the mask mandate based on the information received from local health professionals. He said they must protect vulnerable populations, workers at businesses and school children. Councilman Sean Reed echoed Byrne’s comments by emphasizing how masks instill confidence for people when shopping and visiting local businesses.

“I think one of the reasons we’re so above the numbers (sales taxes) is outside of Midwest City and some others is no one is wearing masks,” Reed said.

Citizens spoke both for and against the mask mandate during the meeting. Lori Williams, a resident, said she does not agree with the mask mandate. She said cloth masks are not effective in stopping the spread of the virus and questioned the constitutionality of the mandates.

“When you try to force to make a person wear a piece of material on their face and say to do it for the greater good you’re violating their individual rights as a sovereign being,” she said. “When you force a mask mandate, you’re saying there is one solution to fix this problem and that solution will be forced upon everyone as a whole.”

Jana Berger, a resident, urged the council to continue the mask mandate. She said she would like to see the cases decrease and believes health experts recommendations.

“We have flu season approaching and we learned about asymptomatic spread and we don’t always know that we’re passing it to each other and I believe masks, social distancing and hand washing are the best tools we have,” she said.

Following the public comments, Mayor Matt Dukes said he planned to vote against the mask mandate because of a lack of an “end game.” He said state statutes do allow the government to take measures during a health crisis to protect the public and believes the city council has taken appropriate steps.

“As a leader in this community, I feel like we need to move forward,” he said.