The Mustang Broncos have been on a wild roller coaster ride through four games this season, and Saturday’s game with Norman North was definitely one of the dips. The Timberwolves came to town and did pretty much what they wanted to do all night as they put a whuppin’ on the Broncos by a score of 42-14 at Bronco Stadium. 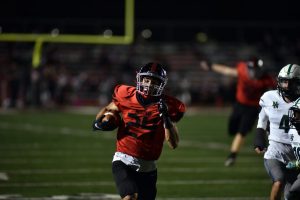 The first game of the year was a super high because they spanked their bitter rival Yukon. The second game was at home vs Stillwater. Ugh. Last week was an overtime thriller against Norman that put everybody back on the high track. Saturday vs Norman North? More ugh.

The game actually started off pretty well for the Broncos. The first quarter was scoreless, and the Bronco offense had some success moving the ball before getting held on downs at the Norman North 36 yard line.  The Timberwolves had to punt twice in the quarter, and the defense was looking solid.

Norman North made some offensive adjustments, and started running the ball almost at will right up the middle, into the heart of the Bronco defense. The Timberwolves scored two touchdowns in the last six minutes of the first half to take a 14-0 lead into the locker room. Both touchdowns were scored by senior running back Gabe Trevillison, on runs of eight and 11 yards.

Neither team scored until 3:44 left in the third quarter when Norman North QB Jackson Remualdo scored from a yard out, making the score 21-0. Less than a minute later the home folks were given something to cheer about when Bronco QB Tristen Russell and WR Jacobe Johnson hooked up on a 50-yard pitch and catch to make the score 21-7, and it seemed like there was a glimmer of hope.  That hope was all but dashed on the ensuing drive, when Trevillison went the distance for a 45-yard touchdown scamper, making the score at the beginning of the 4th quarter 28-7 in favor of the Timberwolves.

Norman North added a touchdown with just over 8 minutes to go on a one yard plunge by running back Chapman McKown. There’s no quit in these Broncos, though, and they scored a TD on a 27-yard pass from Russell to running back Devyn Martin. That made the score 35-14 with 4:27 left to play.  The Timberwolves tacked on one more touchdown, a 40-yard sprint by McKown that ended the scoring at 42-14.

The Broncos did not have a terrible night on offense. They were able to move the ball fairly easily between the 20-yard lines, but too many drives stalled as the team neared the red zone. The Broncos put up 331 total yards, 211 of them through the air. Russell accounted for all of those yards on 9-18 passing, with two TD’s and two interceptions. Johnson caught four balls for 125 yards and a TD, and Devyn Martin accounted for a total of 76 yards rushing and receiving.

Next up for the Broncos is a road game vs Southmoore on Thursday, October 1, at 7 p.m.