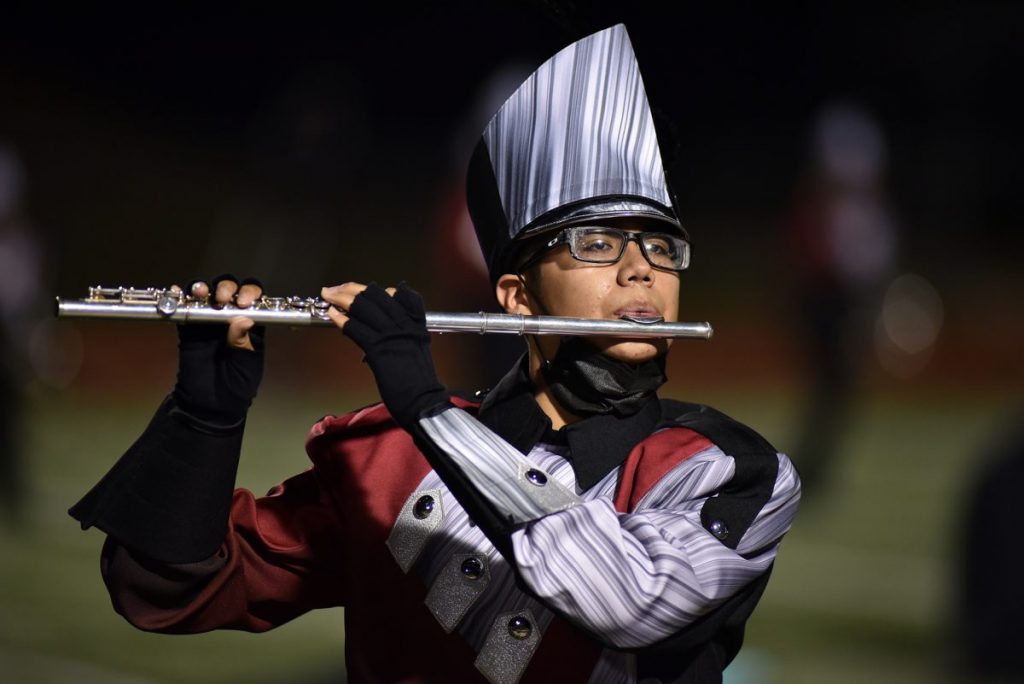 Mustang High School marching band performs Saturday during the Broncos’ football game against Norman North. The band’s normal schedule was sidelined due to COVID-19, but staff and students alike are working to get as much out of the season as possible, director Ryan Edgmon says. (Photo by Alan Chapman)

With a global pandemic that’s upended almost everything they associate with their fall season, Mustang instrumental music staff and students are marching forward – and they are rising to the challenges posed by the novel coronavirus.

“Overall, everyone is handling our situation gracefully – it is kind of one of those things where you accept the parameters and just make everything the best we can,” Mustang Public Schools district instrumental music director Ryan Edgmon said Sunday. “Some things are uncomfortable, but we have largely been able to push through and still enjoy some time together making music.”

The season seemed particularly strange because of what came before it. Mustang High School’s marching band’s 2019 program “Rawr” struck a chord with audiences with its blend of strong musical and visual performances and the humor of dinosaurs running all over the field; the program also propelled the band to history-making tournament placements.

So, it was a predictable letdown that this season would be so different than those in the past – there would be none of the usual match-ups with other bands, no trips and very little chance to perform for audiences a program that takes literally months to prepare.

But, the show must go on, and Ryan Edgmon and his staff worked to do just that, while navigating murky waters involving distance learning, social distancing and incorporating – of all things – masks into the 2020 marching show, “The Promise of Living.” And, as they’ve seen with band students in years past, the members of the 2020 MHS marching band rose to the challenge, Edgmon said.

Marching season is normally an incredibly busy time; high school students begin practice during July’s intense heat after a summer break much shorter than many of their contemporaries; work developing their show continues through school starting, as contest season runs through September and October. Concurrently, the group plays at all home – and, historically, at least some, away football games – while maintaining an average higher than usual grade point average, documentation showed, and many taking private lessons in preparation for concert band, which follows immediately after marching ends.

With much of their season sidelined due to safety considerations relating to the potential spread of COVID-19, the band focused on the one remaining event still scheduled – OSSAA’s West Regional Marching Band Contest is still set for Oct. 27 at Yukon High School.

OSSAA differs from most other marching band events Mustang participates in – at least in terms of bands competing against each other. OSSAA is a standalone tournament, in which high schools are judged upon their individual merit and given a rating. It’s an important part of the season because it is part of a larger assessment of a school’s instrumental program.

While other regular tournaments won’t be on tap this year, Edgmon and several of his fellow band directors began to look for ways to give their students a chance to perform for their peers at other schools. That chance comes through Band Together, a program that will bring together some bands in two sessions – one each at Moore and Mustang high schools and currently set for Oct. 3 and Oct. 24, respectively, Edgmon said.

“We are working with a few other area schools to create some great performance opportunities for our bands – essentially, it will all function like a ‘finals’ style performance,” the director said. “The event will feel very much like a contest but without the scoring component.

“Every school and every band are dealing with varying degrees of restriction,” he said. “A competitive event didn’t feel appropriate, but we are still able to gear up for great performance environments and enjoy the opportunities we do have.”

This year’s marching band – which includes both instrumental music performers and color guard – tops out at 261, making Mustang one of the largest bands in the state. It’s a number that’s exploded in recent years, just as the school’s band program has risen in stature, both across Oklahoma and beyond.

The interest in instrumental music in Mustang schools isn’t just concentrated at the high school – in the strange world of the fall 2020 semester, about 1,200 students participate in band programs, including some doing so through distance learning, Edgmon said.

“This (virtual learning) has definitely been our most notable change with COVID,” he said.

With the transition from fall to spring semesters so too will the instrumental music program change, as marching gives way to concert band – which, Edgmon said brings with it its own set of unique challenges.

“We have approximately 130 students in concert bands right now and things are moving along well – we are utilizing specially adapted masks, bell covers and distanced classrooms to keep that part of our world moving,” he said. “We haven’t crossed the indoor performance bridge just yet, but we will get there.”

Mustang High School marching band performs Saturday during the Broncos’ football game against Norman North. The band’s normal schedule was sidelined due to COVID-19, but staff and students alike are working to get as much out of the season as possible, director Ryan Edgmon says.