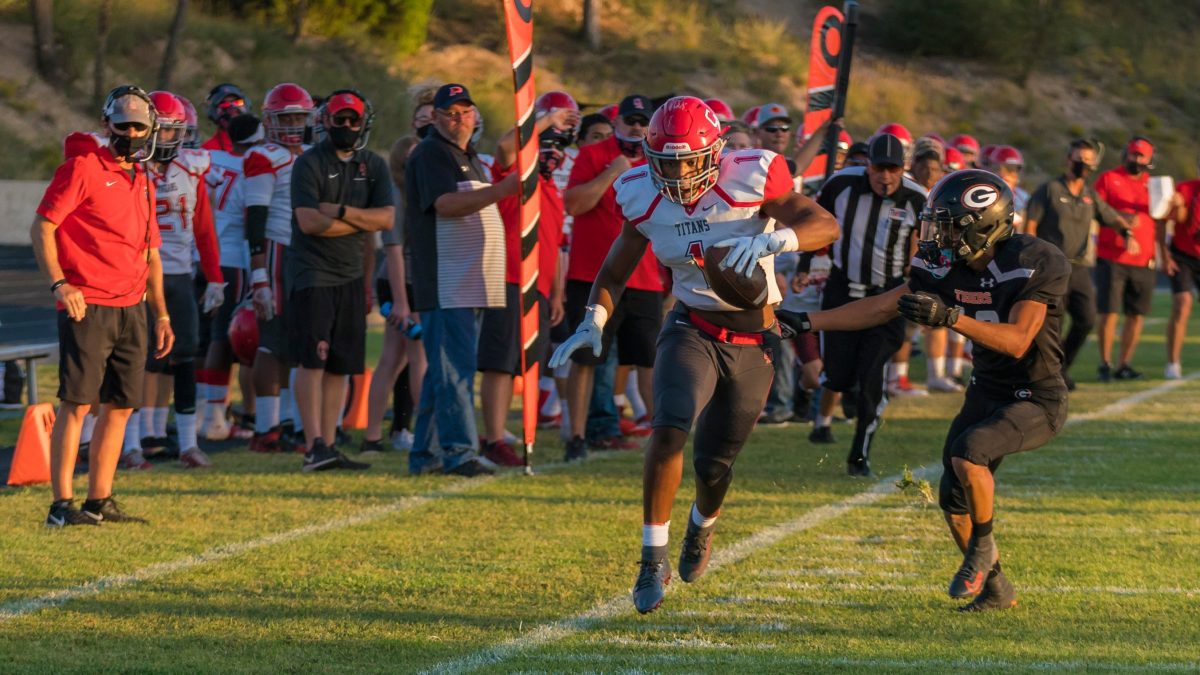 Carl Albert’s Javion Hunt out runs a Guymon defender down the sidelines. (Photo by Mark Loken)

The Carl Albert football team took their show on the road Friday night with a 63-0 win over Guymon.

Senior quarterback Ben Harris threw for 231 yards and five touchdowns with three to Xzavier Thomas. The Titans outgained Guymon 394 to 197 in total yards.

Carl Albert’s defense was lights out as they forced five turnovers and did not allow Guymon to convert on third or fourth down all night.

The Titans exploded with 57 points in the first quarter. Harris put them on the board first with a 10-yard pass to Thomas for a 7-0 lead. Lamereon Curry followed with a 50-yard punt return touchdown.

Harris added four more touchdown passes in the first. He connected with Thomas on passes of 17 and 56 yards, and Crews and Houston Russell. Javion Hunt and Kentrell Bizzell also ran for scores to make it a 57-0 lead at the end of the first.

Carl Albert found the end zone again in the third quarter. Miles Lewis III scored on a 5-yard run. Aden Wood added the extra point to make it a 63-0 score.

With the win, the Titans improved to 4-0 on the season and 1-0 in District 5A-2. They return home Friday to take on Bixby in a non-district game. The Titans were scheduled to host Guthrie but the game was canceled due to COVID-19 concerns. Guthrie canceled its game against Piedmont last Friday after a player tested positive for the virus and several others were quarantined.

Bixby was in a similar position when their game with Putnam City West was canceled after Putnam City Schools canceled athletics due to elevated COVID-19 levels in Oklahoma County.

The non-district clash features two of the state’s most dominant programs. Bixby has won the Class 6A-II state championship in five of the six years since the 6A split.  The Spartans have won 28 straight games, which is the longest 11-man winning streak in the state.

The Titans have won four consecutive 5A state championships.

Carl Albert won the last meeting between the two schools in the 2009 5A state championship.