Northern half of toll road to open with virtual ceremony

The northern half of the new Kickapoo Turnpike, connecting I-40 and I-44 in eastern Oklahoma County, is set to open next week.

The remaining section of the toll road is expected to open in the first quarter of 2021.

A virtual opening ceremony will be hosted online at the Oklahoma Turnpike Authority’s Facebook page at the opening time, 11 a.m. Oct. 13.

When available, that live stream can be found HERE

The project was announced in October of 2015 with a goal of being complete in 2021.

The new eastern Oklahoma County corridor was the largest project included in the Driving Forward initiative. The 21-mile stretch of toll road has been making rapid construction progress in the Harrah area since work first began in 2018. 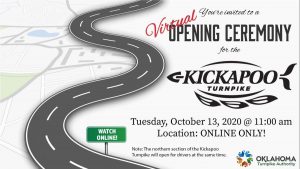 The OTA reports the project will allow for a high-speed connection from eastern Oklahoma County to two major intersections for travel.

Opening with the new 80 mph speed limit for rural turnpikes, the toll road is expected to produce a significant drive-time reduction to access Tulsa from the Oklahoma City metro area, and should also help alleviate current congested traffic inside Oklahoma City.

“The Kickapoo Tribe is humbled to have the new turnpike in our name,” Pacheco Jr. said. “We are honored to join a list of turnpikes honoring other Oklahoma Native American tribes including the Chickasaw, Cherokee, Creek and Muskogee turnpikes, and we are excited for what this ribbon cutting signifies for the state of Oklahoma.”

The Kickapoo Turnpike is one of six individual projects within the Driving Forward program announced in October 2015.

“The completion of this portion of the turnpike represents our effort and determination to make Oklahoma a Top Ten state in all areas,” Gov. Stitt said. “As more people decide to make Oklahoma their home, we are building an infrastructure that can support every Oklahoman – resident or visitor – and the opening of this portion of the Kickapoo Turnpike is an achievement towards that need.” 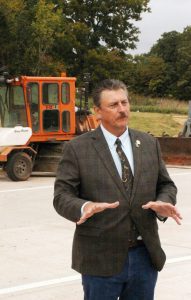 Oklahoma Secretary of Transportation Tim Gatz stands along the new Kickapoo Turnpike north of Britton Road, and discusses how the opening of the northern portion of the toll road is opening ahead of schedule. (PHOTO BY RYAN HORTON)

The toll road was designed to feature four interchanges, between I-40 and I-44, including SE 29th Street, Reno Avenue, NE 23rd Street and Britton Road. Those east and south running roads that do not have an interchange with the toll road will run either over or under the new turnpike.

“Our number one priority has been to improve the safety and security of travelers,” Gatz said. “This turnpike goes far and beyond laying concrete and installing traffic signs. It signifies a safe, convenient route to travel between Oklahoma’s two largest cities, empowering Oklahomans to thrive.”

For more information about the Kickapoo Turnpike and other OTA projects visit www.drivingforwardok.com.

Those who wish to attend this free event can tune in by visiting https://video.ibm.com/channel/jsW2fC3uurE. 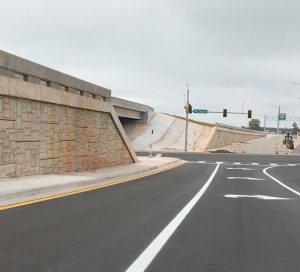 The view from the Kickapoo Turnpike southbound off ramp looking toward NE 23rd Street in Harrah.
(PHOTO BY RYAN HORTON)