No. 1 Bixby is first Oklahoma team to stop Yellowjackets

In a District 6A-II-2 matchup the No. 4-ranked Yellowjackets were threatening No. 1 Bixby all night, but as time expired the Spartans survived with a 24-13 victory.

The CHS loss was the first of the season at the hands of an instate opponent, while the win was the 30th straight for Bixby.

Choctaw High School’s defense proved again to be among the state’s elite as they held the powerful Spartan offense to only seven points in the first half. Meanwhile, the explosive Jacket offense showed they’re more dangerous than ever moving deep into district play.

The Spartan offense was powered by Braylin Presley who had 167 yards and three touchdowns on 28 carries. 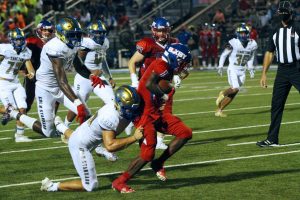 Donnie Wingate tackles Braylin Presley as Jordan Mukes and the rest of the CHS defense closes in. (PHOTO BY RYAN HORTON)

After a scoreless first quarter, Presley made a 33-yard touchdown run early in the second quarter.

Choctaw answered with a 1-yard dash by La’Trell Ray followed by a PAT from Tommy Yousey making it a 7-7 game at halftime. 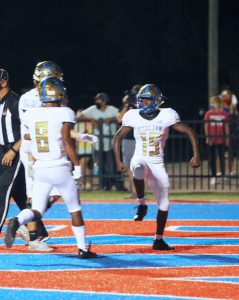 The Spartans captured the lead for good on Presley’s go ahead 3-yard run less than a minute into the second half. Connor Nolan then hit a 24-yard field goal to put the Spartans up by two scores.

However, Choctaw remained threatening until the final minute of play as Terrill Davis and Ray each had scoring efforts ruled down at the goal line.

A final assault on the Spartan end zone with just under three minutes remaining was setup by a pick from Ethan Rone. A big pass from quarterback Steel Wasel to Wes Zeigler at the 1-yard line put the Jackets at goal and ready to strike with two minutes to go.

With vocal opposition from CHS fans in attendance, officials ruled that the ball didn’t enter the end zone on two consecutive plays as Choctaw attempted to drive the final yard. A turnover on downs allowed the Spartans to run out the clock just outside their own end zone.

“Solid start, and a really solid finish. I thought we were in pretty good position to win a game tonight. A few plays we could have made on O, and a few on D. But you go watch Choctaw High School football and you’re going to see 11 kids fly around and give you everything they got. I’m proud of my kids, my assistant coaches, and coordinators. They did a fantastic job scheming them up, and our kids worked their butts off. Obviously, I give it up to Bixby. They’re No. 1, you could argue in the state period, and it’s hard to argue they’re not at least No. 2 in all classes,” said CHS head coach Jake Corbin. “We didn’t come here wanting to rub around with them. We wanted to go beat them. That’s our goal, and it shows us where we are and where we’re not. We have a ways to go, and we knew that coming in. I want everyone to know we played our hearts out and left everything on the field. We made some mistakes in some areas, but it was really a pretty clean ballgame. I’m proud of how our kids acted and played like champions.” 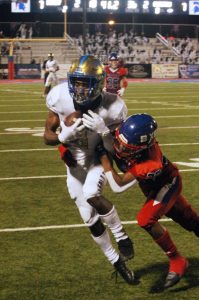 Terrill Davis puts in work on the Spartans at their home field. (PHOTO BY RYAN HORTON)

Choctaw  (3-3, 2-1) suffered their first loss of the year to an Oklahoma challenger as they met Bixby on the gridiron for the first time in school history.

Bixby has claimed five of the six Class 6A-II state titles, while Booker T. Washington claimed the other.

Choctaw was the first team to hold Bixby to less than 30 points since the 2018 season, but the Jackets wanted the win.

The Jackets will be preparing for a possible rematch in the playoffs.

“You want to win every game, but the bottom line is you need to improve every week. I feel like we took a step forward this week. My favorite thing about it was my guys really expected to win,” said Corbin.

“Now we have to turn around and get back to district play, and hopefully look forward to playoffs. We have tough opponents coming up. We have a short week coming up and play Muskogee at home Thursday.” 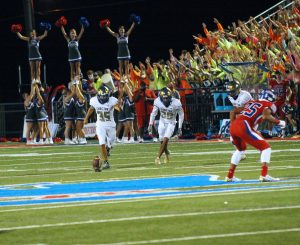 Tommy Yousey (35) prepares to kickoff at Bixby, while Gabe Lopez (30) looks on. (PHOTO BY RYAN HORTON)