The northern half of the Kickapoo Turnpike, connecting U.S. Highway 62 to I-44 in eastern Oklahoma County, opened Tuesday.

The northern 11-mile section is a four-lane divided highway that connects to NE 23rd, near Luther Road, to I-44.

The toll road is now open to north and south bound traffic between NE 23rd Street and the Turner Turnpike with the Britton Road exit and on ramp open in between.

The road has an 80-mph speed limit. 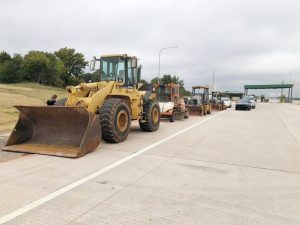 Heavy equipment parks roadside as work is wrapped up near the new toll plaza north of Britton Road Road on the Kickapoo Turnpike. (PHOTO BY RYAN HORTON)

The remaining section of the toll road, NE 23rd south to I-40, is expected to open in the first quarter of 2021.
That section will include full interchanges at Reno and SE 29th Street.

A virtual opening ceremony for the first phase was hosted online at 11 a.m., Oct. 13. The toll road officially opened to the public at that time.

“The Kickapoo Tribe is humbled to have the new turnpike in our name,” Pacheco Jr. said. “We are honored to join a list of turnpikes honoring other Oklahoma Native American tribes including the Chickasaw, Cherokee, Creek and Muskogee turnpikes, and we are excited for what this ribbon cutting signifies for the state of Oklahoma.”

The Kickapoo Turnpike is one of six individual projects within the Driving Forward program announced in October 2015.

“The completion of this portion of the turnpike represents our effort and determination to make Oklahoma a Top Ten state in all areas,” Gov. Stitt said. “As more people decide to make Oklahoma their home, we are building an infrastructure that can support every Oklahoman – resident or visitor – and the opening of this portion of the Kickapoo Turnpike is an achievement towards that need.”

The current open section makes a high-speed connection for drivers from the Choctaw, Harrah and Jones areas to access the north Oklahoma City and Tulsa areas.

Gatz says the Kickapoo Turnpike is a section of what will eventually be Oklahoma City’s outer traffic loop to alleviate traffic in the Oklahoma City metro, while also improving drive time between the state’s two largest metro areas.

“Our number one priority has been to improve the safety and security of travelers. This turnpike goes far and beyond laying concrete and installing traffic signs. It signifies a safe, convenient route to travel between Oklahoma’s two largest cities, empowering Oklahomans to thrive,” said Gats.

“As Oklahoma City grows, we need to give people coming from places like the Tulsa area who don’t have any direct business in the metro area but need to get through here a way to save time and not be a part of our increasing traffic congestion.”

Officials say the project has been a long time coming as an outer loop system has been planned for decades, but until now progress had only been made west of I-35.

Officials believe connecting the major thoroughfares of I-40, I-240 and I-44 as well as other major county roads east of the congested metro was wanted and needed by the masses, and necessary for future growth which is inevitable.

“If you need to get through central Oklahoma from a side of the state like Tulsa, there will no longer be the need for you to drive deep into Oklahoma City unless you absolutely want to,” said Gatz.
“It’s been long recognized there’s been a lack of access. We’ve needed a high-speed modern transportation facility out here on the east side of Oklahoma City.”

The project was officially announced in October of 2015 with a goal of being complete in 2021.

The eastern Oklahoma County corridor was the largest project included in the Driving Forward initiative. The first phase is just over 11 miles, and the total stretch will be nearly 21 miles.
Work first began in 2018, and the project has moved rapidly.

The entire toll road is projected to be open before the end of the first quarter of 2021.

“We’re ahead of schedule,” said Gatz. “We plan on opening the next section by February or March, but we are confident we can be ready to open that early as well.”

When first announced, the OTA hosted several public forums in the area, which resulted in a vocal opposition protesting against construction of the new road.

Despite those outspoken critics, OTA officials say the majority of property owners that sold their land for the project were satisfied with offers above market value.

Gatz says less than five percent of property acquired for the project went to condemnation court, and not every case was as simple as a refusal to sell.

“If you look at the overall cost of this facility, it’s about $450 million and that’s not atypical for a 20-mile section. Out here in the corridor we acquired somewhere in the access of 350 parcels to build this facility. Less than five percent went to condemnation court, and that’s not necessarily and adversarial thing,” said Gatz. “When we buy property, we have to get some type of right of way for every improvement we do, and that’s probably the most important thing we do. We’re asking private property owners to make a sacrifice. We go in and make an appraised market value assessment to begin negotiations, and we’ve been pretty successful to have such a low percentage. This system is in place to protect the property owners, and make sure they’re not getting taken advantage of, and you’re never going to get 100 percent approval from property owners. That’s why that system is in place.” 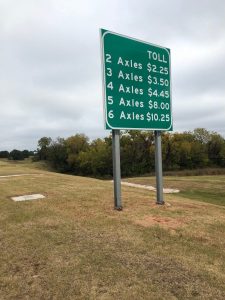 Cash customers will be charged the same amount to travel the full length. That’s 2.25 for passenger cars and $10.25 for tractor-trailers.

For more information about the Kickapoo Turnpike and other OTA projects visit www.drivingforwardok.com.

Click HERE for a video of the new road taken days before the official opening.