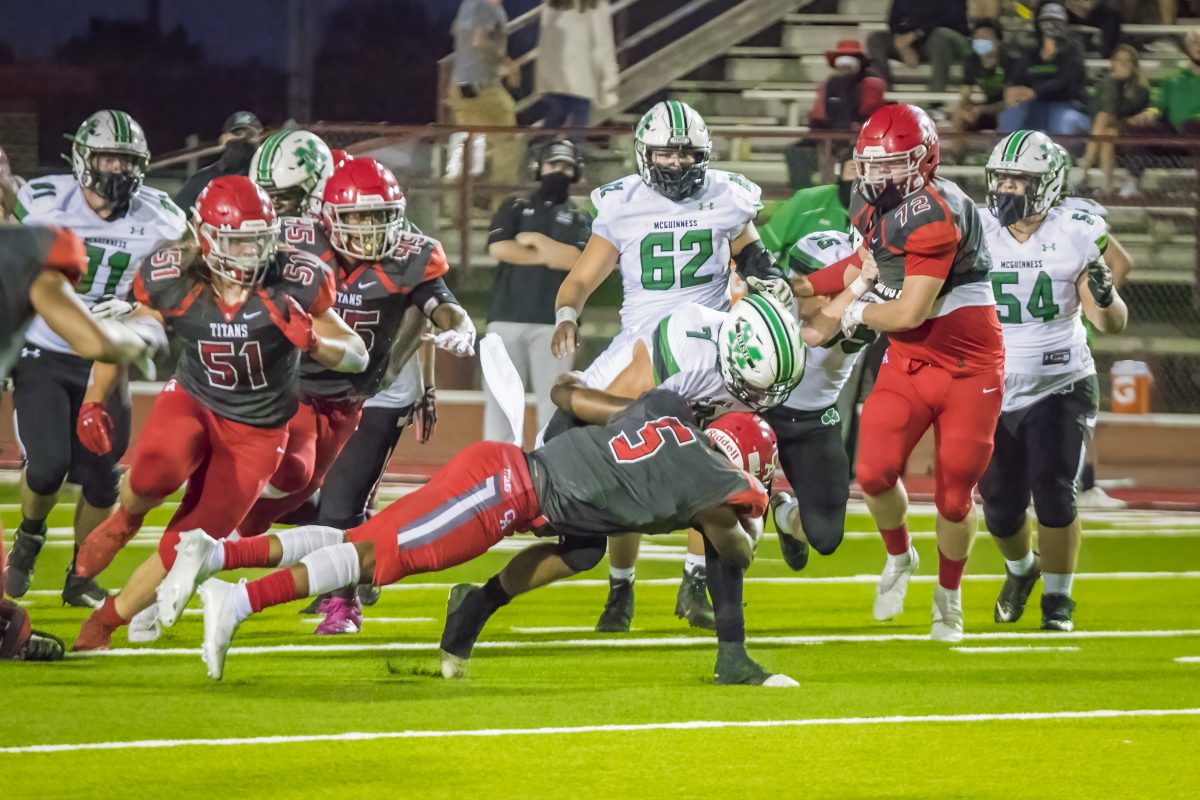 And he wasn’t about to see that domination snapped Friday night even when the cocky Irish bunch led by their quarterback Luke Tarman put 35 points on the scoreboard—in the first half.

As a freshman in 2017, skinny, little Ben Harris led the Titans to a 21-6 district victory, then came back in the OSSAA Class 5A State Championship game to pace a wild 34-23 triumph over the Irish.

As a sophomore, it was CA 20, McGuinness 14 and the Irish didn’t survive as the Titans beat Ardmore for the title in a game that lasted all night till the early morning hours.

Last year, it was a 40-0 romp during the district as the Irish were allegedly without several key players. Come State Championship time, it was no different, a 30-15 Titan victory for their fourth straight state title, three in a row for Ben.

Which brings us to Friday night’s game which Ben’s mom Kristy Carr described as a “nightmare” at halftime. She thought we might still be playing Bixby.

“Second half we challenged them to come back and play like Titans with emotion and fly around and they did a much better job. They responded, I’m really proud of them for doing that,” Corley said after post-game celebration had died down a little.

Harris had two touchdown passes in the first half, a 77-yard beauty to Lamereon Curry that gave the Titans a 7-8 lead after Jacob Eddy blasted through the first of 7 straight PATs.

But Tarman, who was responsible for all five McGuinness touchdowns, did his best Ben Harris imitation in the first half and led his team to four more touchdowns and a 35-21 lead at intermission.

The Titans were down, 21-7 and McGuinness scored early in the second period to go up by three touchdowns and, indeed, it did seem eerily similar to the Bixby disaster. Ben connected with Xzavier Thomas for 48 and Houston Russell for 16 to set up an 8-yard TD toss to Tashawn James.

JAVION HUNT blasted in from the Wildcat with just 42 seconds left on the first half clock and Eddy narrowed it to 35-21 at halftime.

The Titans in fact returned from the dressing room for the second half with a great deal of emotion taking the second half kickoff at the 21. Ben was pin-point accurate with completions to Russell, Thomas and Curry, then cross up the Irish with a five-yard keeper to move it to the 23 where he found Curry on a crossing pattern and Dax Swanner to Russell to Eddy made it 35-28.

Noah Dobson, on loan from the offense, and Caleb Zangari sandwiched Larman and forced the ball loose and Dondi King pounced on it to give Ben and the Boys first down on the 40.

He hit Russell for 8, Cobe Crews for 15 and Curry for 20 to reach the five and Kentrell Bizzell banged in from the Wildcat and Eddy tied it at 35-all.  Keyon Dickerson celebrated his birthday, joining Corey O’Hagan and Ezra Gustafson to sack Larman and a fourth down try to give CA the ball on the 26.

Big Ben took over and guided his boys down to the 8 when he faked to Hunt and waltzed into the end zone only to see it negated by the dreaded yellow flag. The ball was pushed back to the 12 and again Harris blasted his way into the end zone.

“I don’t get to run the ball that much so when I get a chance to run it means a lot, especially when I get in the end zone,” Harris said. “When I scored it was perfectly executed. The line made a perfect hole for me.”

But the emotional Titans weren’t through as Bizzell scored on a 49-yard after the “D” forced another punt and then Kentrell added a 17-yarder near the end to put the 56 on the home side of the scoreboard this week to cap a streak of 42 unanswered points by CA.

In addition to his TD run, Ben connected on 18 of 26 passes for 322 yards and three touchdowns.

Revenge could be a factor Thursday night when the Titans travel to Piedmont, scene of last year’s stunning 10-6 loss to the Wildcats, which snapped CA’s 40 game winning streak.